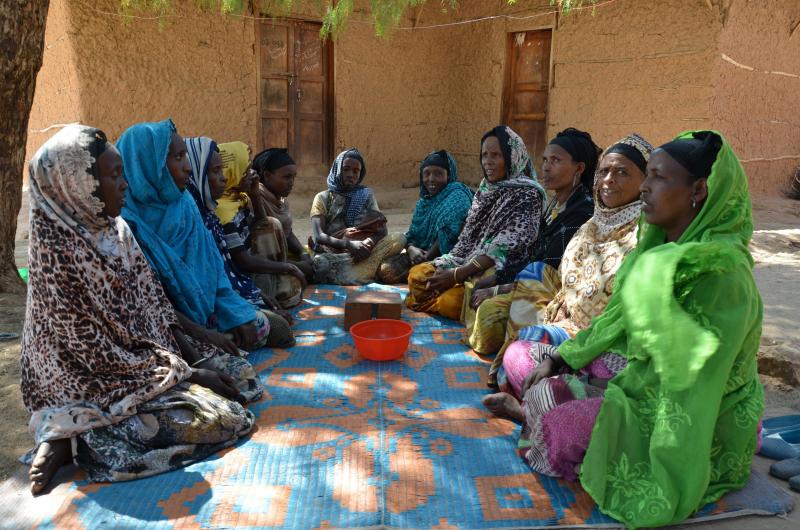 Collective savings and access to loans have helped a group of women in Ethiopia cope longer with the ongoing drought, but now resources are running out.

The El Niño weather system has caused an extreme drought in Ethiopia. Crops have failed completely in large areas of the country. More than 10 million people depend on food assistance from the government and aid agencies like CARE.

Kedija Abra Umer, a mother of six, lives in one of the worst affected areas in the region of East Hararghe. Umer is the leader of one of the Village Savings and Loans Groups for women set up by CARE in the area several years ago.

The drive to her village takes us through endless dry fields of ruined sorghum crops.

“We never encountered this kind of drought in our life before” says Umer. “The current drought has exposed us to different kinds of problems, including lack of food for ourselves and for our livestock. The water shortage is so serious that there is not enough for livestock to drink and crops are drying up. Of all the ponds in our village, only one still contains some water. We have not been able to plant and harvest vegetables, which are source of income for people in normal time. We never faced this kind of problem before.”

Had it not been for the savings and loans groups, the community would be even worse off, Umer believes.

“The drought has forced us down several levels, but that does not mean we are the same position we were before we organized into the groups. Group members have access to emergency loans and this will be done in discussion among the members so that the worst affected can get money to purchase food for family members and protect their children from hunger” she explains.

Being able to take up small loans from the collective savings box makes all the difference for people who have no access to formal financial services. Until the current drought, Umer’s group had made steady progress with the use of their savings.

“Before we organized into savings and loans groups, we lived in huts roofed with grass and we used to sell our bulls for less money while they were still young. This was because we did not have access to loans” Umer explains. “After we organized into the groups, we could access money through loans. We managed to avoid selling our young bulls and keep them until they got bigger and fatter. Then we could sell them for a good price, enough to construct a house roofed with corrugated iron sheet.”

“Before this drought, we took a collective loan from our group and bought and planted potato tubers. We got a good harvest and gained a good income of 10,000 birr [$650 CAD]. With this money we bought livestock, reproduced them and benefited a lot. The other groups learned from us, engaged in the same practices and benefited the same way. All this was because we organized into groups and could access loans from the savings box. We will continue with the group and we will even educate our children to accept and practice it because of its benefits” she says.ave access to loans” Umer explains. “After we organized into the groups, we could access money through loans. We managed to avoid selling our young bulls and keep them until they got bigger and fatter. Then we could sell them for a good price, enough to construct a house roofed with corrugated iron sheet.”

However, with both harvests of last year having failed, the women have no more money to set aside and the groups’ accumulated savings are no longer enough to cope.

“Due to the current drought, we have not been able to save as much money as before, and so the amount of savings has declined. Some people are now moving from the village to stay with relatives in other areas. As a result we have fewer members in the groups. A person without food to eat cannot think of saving and is not motivated to do so. A hungry person cannot work and get money to save” Umer points out.

“There will always be a solution as long as we have food for ourselves and for our livestock, but if a person has nothing to eat, there is no solution for any problem. If the current drought continues, the problems will get more severe and the hunger will be stronger.”

CARE is supporting the government’s assistance to people affected by the drought by providing emergency food supplies, clean water and helping vulnerable communities prepare for the next crisis. Umer is clear on what her community needs to be better prepared:

“In the future, it will be better if we have access to loans, livestock supply and feed for livestock, as we have received before, so we can engage in fattening. In doing so, we can increase our income, benefit more and we will also be better able to cope with drought.”

Your support helps CARE empower women to lift themselves out of poverty.