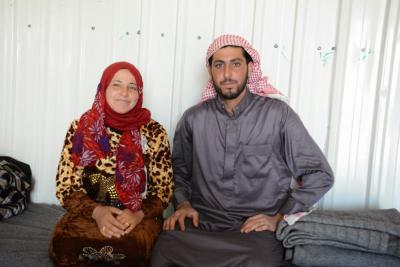 Ibrahim and his wife Fatima fled their home in Idlib, and have been living in Azraq camp in Jordan for only 15 days. While this is their first time in a refugee camp, life in Jordan is not completely new to Ibrahim.

“I worked in farming in the Jordan valley and Mafraq, and used to live between Jordan and Syria,” says Ibrahim, 26. “But when the conflict started I remained in Jordan continuously for two years and a half.”

However, Ibrahim returned to Syria for the sake of his true love.

“Fatima and I had been in love for seven years when I heard in the summer that someone else had proposed to her,” says Ibrahim. “We grew up together. Fatima and I are from the same village, and she’s two years younger than me. I always wanted to marry her but I was waiting for the situation in Idlib to calm down. But when I knew I might lose her to someone else, I risked my life to return home to marry her. She is the love of my life!”

The journey back to Syria

“I went to Syria through Turkey. The trip took me more than two days and cost me a lot of money, but I was happy to do it. It was worth the effort.”

For six months, Ibrahim and Fatima remained in Hama, Syria, where Ibrahim’s family lives. But they describe the situation in their home village in Idlib as miserable.

“There was bombing all the time. Planes were shelling the city. You cannot know what to expect from where,” says the couple.

“Our village is now empty. All the houses were either burned down or bombed,” says Ibrahim. “We went to stay with my family until we could cross into Jordan. We were transported to Hama hiding in a truck carrying watermelons and driving through bombing and fire. It was a journey that I can never forget.”

Fatima holds a bachelor degree in Arabic literature. “I used to work as an Arabic school teacher,” says Fatima. “I miss life as I once knew it, but I miss my family the most. The moment I left them I was heartbroken because I knew I wouldn’t be able to see them again soon. But what else could I do? We had to leave.”

Fatima and Ibrahim came to Jordan with only two suitcases, which is all that they could carry.

“We stayed at the border for three days, it was very cold,” says Ibrahim. “We slept on the bare ground and only had one blanket to cover ourselves with. Yet, we were luckier than many of the thousands of people stranded there because we had some bread to get through the days. Some people had to eat grass to survive. But there were too many people at the border. We were one group of more than 700 people entering Jordan at the same time. The priority was for people with disabilities, elderly, ill people, and single women.”

Life in the camp

Before arriving at the camp, the couple had imagined camp life differently.

“We had heard a lot of anecdotes about Syrian refugee camps being disorganized and chaotic,” say Ibrahim and Fatima. “But since our first day in Azraq camp we realized that it was much better than we had expected. We are going to register with CARE tomorrow for volunteer opportunities.”

Ibrahim heard about CARE’s community services in the camp through the outreach team, but also through neighbours.

Ibrahim and Fatima’s wishes are no different from those of any refugee from a war-torn state. “All we wish for is safety,” says the couple. Ibrahim elaborates saying: “I hope Syria becomes a safe place; where one will not have to worry about being attacked, about their car being stolen, a bomb hitting their house, or their house being robbed.”

You can help supprt Syrian refugees