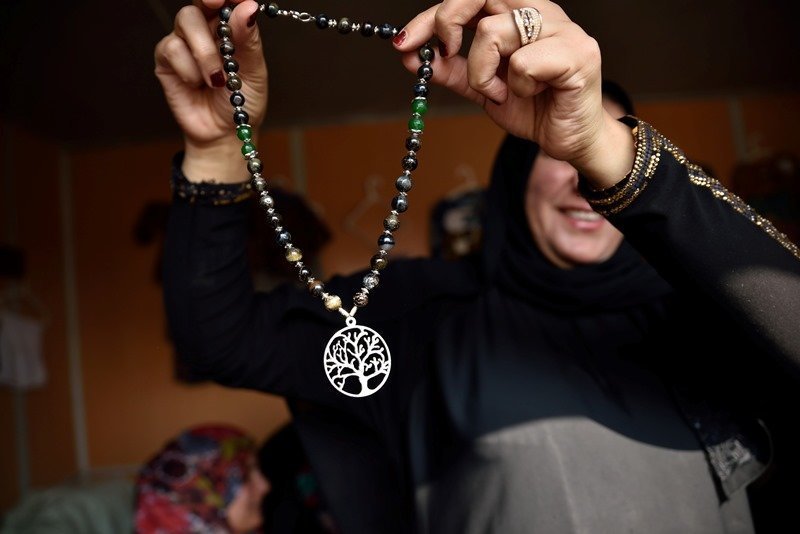 A few days ago, I visited Azraq camp in Jordan, for refugees from Syria. 30,000 people who have fled the war in Syria now live in this camp.

I met Kansa and her two children – one a baby only three months old. Kansa, her children and her husband had just arrived at Azraq, after travelling for three days from Aleppo in northern Syria. She was just relieved to have arrived in the safety of the camp. 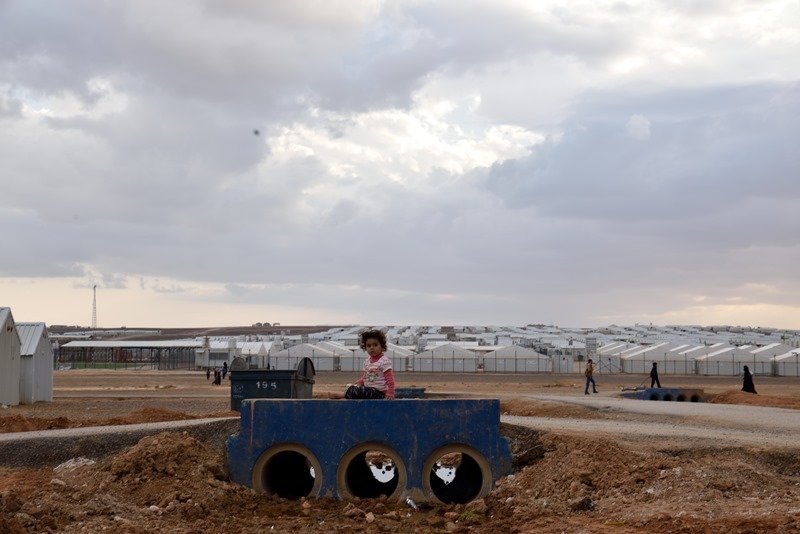 Three years ago, Hussain escaped the war in Syria, where he was a farmer outside Damascus, with his family. He worked without a permit as a welder in Amman, the capital of Jordan, to support his family, but had to move to Azraq camp 10 months ago to ensure his baby daughter was legally registered. He just wants the freedom to work.

Over 680,000 Syrians (and that’s just the official figure) have fled the war and sought refuge in Jordan in the last five years. That’s almost 10% of Jordan’s population. We should congratulate Jordan for the way it has welcomed these people in desperate need into their country.

But the government is understandably concerned about how quickly it can absorb all these people into Jordanian society. That’s why over 100,000 of the refugees are kept in two major refugee camps, Zaatari and Azraq, and why it’s very difficult for Syrian refugees to work legally in Jordan.

Syrian refugees in Jordan can apply for a very limited number of work permits, but the process takes months and costs hundreds of dollars. Employers are supposed to pay the costs, but don’t. So most people cannot even consider this. Syrians who are found working without a permit may get a first warning, but otherwise their whole family will be moved into a camp.

20-year-old Ali was studying science in Damascus when his family fled the war and arrived in Jordon in 2012. At first they lived in Amman. He worked without a permit in a patisserie, and was caught, so his whole family were moved into the camp, where he now teaches piano to children as a volunteer. He told me that all he wants is “the freedom to pursue my talents”.

There are signs of change.

In Azraq camp, CARE coordinates a programme so that residents can volunteer for up to three months within the camp, to maintain or develop their skills, and earn a small stipend from various charities working in the camp. We are also training people in vocational skills, including making clothes and jewellery. 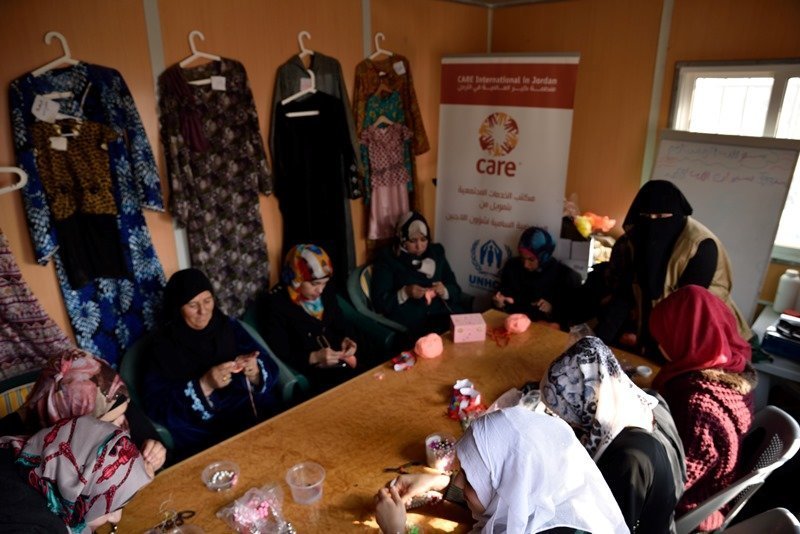 Very soon, a new market will open in Azraq camp with 100 shops – 50 for Syrians and 50 for local Jordanians – which will enable some people to earn a better living inside the camps. 405 people applied for the first 50 shops. If it works, this could be replicated in other ‘villages’ of the camp. (Azraq camp is divided into ‘villages’, each with its own amenities.) Azraq municipality has selected vulnerable people, such as disabled people, from the local Jordanian population to benefit from the programme.

But most refugees in Jordan do not live in camps. Some of them receive an allowance from the UN, which is just enough to cover rent on one room and basic food. Some don’t even receive that. And so CARE is training refugees in Amman and other cities in Jordan, with vocational and entrepreneurial skills, so that they can earn a livelihood or even get a job.

As part of the very same programme, CARE is also training vulnerable Jordanian families without jobs to help them improve their livelihoods. Last week, I visited a community centre in Amman where I met Jordanian women and men who have been trained in a variety of skills, to help them earn a living. 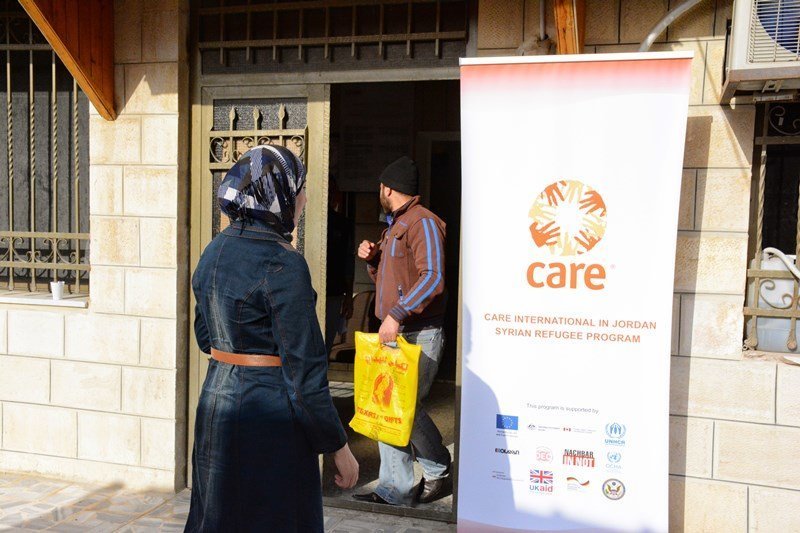 Turkey, Lebanon and Jordan have been hosting almost all of the refugees from Syria for five years. CARE’s approach of working with refugees alongside local people is vital to maintaining positive social integration between communities in these neighbouring countries.

Jordan has a long and proud history of accepting refugees from neighbouring countries – from Palestine since the 1940s, from Lebanon in the 1980s, from Iraq in the 2000s. They are doing it again now, with refugees from Syria. Of course this is a challenge for Jordan. We understand that. But after five years of a civil war that shows no sign of ending, it is time to recognise that the refugees cannot live in limbo any longer.

They must be allowed to live normal lives, including working for a living. That’s what they want: a hand up, instead of an insufficient hand-out. 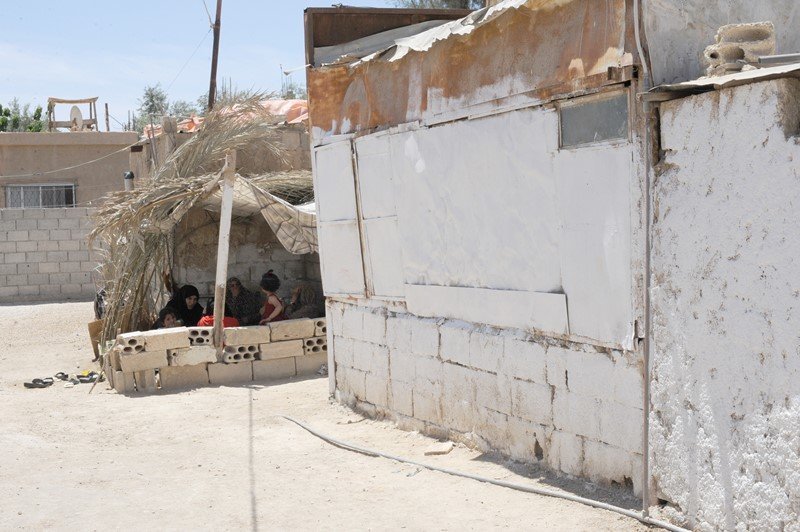 The Jordanian government has now established a refugee unit inside the Ministry of Labour, and is talking about opening up some sectors to Syrian workers. We need to ensure this happens and that the most vulnerable refugees can still afford them.

But Jordan can’t be expected to manage this alone. As recognized at the London Conference on Syria that took place in February 2016, Jordan needs the help of international donors to ensure that Syrians can live a better life in Jordan.

And – if this is something you care about – the possibility of a better life in Jordan is more likely than anything else to dissuade refugees, who can see no prospect of being able to return to their homes in Syria, from taking incredible risks to travel to Europe in search of an end to living in limbo.

Learn more about how CARE is supporting Syrian refugees and how you can help.