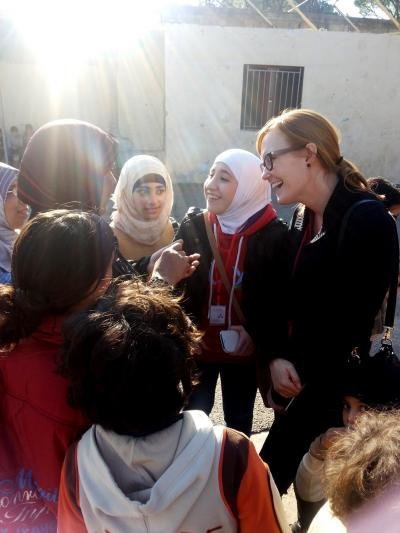 A toddler. Three years old. Little shoes, red shirt, face down in the sand. Waves of an unforgiving sea that has claimed thousands this year alone.

With this startling image, the international media gave a face to a refugee crisis. He is one boy named Alan, but his fate is a global call to action reminding us that what we’ve done so far is not enough.

The Syrian crisis is now into its fifth year and the numbers remain overwhelming. More than 12 million people have been affected, with over four million now living as refugees.

Ali Sandeed, a Syrian-Palestinian refugee living in Lebanon, is a volunteer with a CARE partner organization. Like so many others, he seriously considered paying a smuggler to take a boat to Europe.

“At 27, my life as it was suddenly took a break. I could not work legally in my profession as an engineer any more. I had studied, I had money, a good job. Suddenly, I stood there with nothing at all. Being a refugee also means losing your future, your dreams,” he told our team.

He changed his mind, but it is this sense of hopelessness that has driven so many others to danger.

Five years into this crisis, many refugees have seen their life savings run dry coupled with an inability to find employment.

A CARE assessment in Jordan last spring found that at least 69 per cent of Syrian refugee families live below the national poverty line. In this context, female-headed households were even more likely to be living in poverty than those headed by men.

With donor fatigue from an ongoing crisis, humanitarian assistance is dwindling. For example, in late July, the World Food Programme announced cuts to food vouchers for 440,000 refugees, with the most vulnerable now receiving $14US per person and the remainder receiving only $7US per person to meet monthly food needs. Could you live on $7 a month to feed yourself in a region suffering from hyperinflation?

As emergency director at CARE Canada, I can tell you it is an issue that has consumed our humanitarian operations. Although we have reached over one million people with our programming, it’s not enough. We clearly need to do more. We all do.

But what can Canadians do to help?

Currently, Jordan, Lebanon and Turkey are shouldering the brunt of responsibility, hosting over 97 per cent of Syria’s refugees. While these countries need increased funding to help refugees, outside nations must also increase efforts to help resettle refugees to help share the responsibility for this crisis and to enable people to move on with their lives.

This is not simply Europe’s problem. Canada has a proud history of welcoming those displaced by conflict, including welcoming 60,000 refugees from Cambodia, Laos and Vietnam in 1979 and 1980. In 1986 the UN Refugee Agency awarded its coveted Nansen Refugee Award to “the people of Canada” for their “major and sustained contribution to the cause of refugees” for this incredible generosity.

Yet, it’s a cruel irony that it took the grim news of a young boy’s death to force this important discussion into the Canadian election. But it’s a discussion we need to have and continue throughout this campaign.

Because refugees are mothers, fathers, daughters and sons just like you and me living a life they did not choose. What makes us different is purely circumstance.

Shortly after the Syria crisis began, many refugees assumed the fighting would end and they could soon return to their homes. Those days are gone. Now, more Syrian families live in poverty with an unsure future, unable to return to broken homes and destroyed cities.

Canada and all world leaders can and should be doing more to help. This includes increased funding to help those displaced within the region survive, protection of civilians inside Syria, increased commitment to resettle Syrian refugees quickly, and greater efforts toward a diplomatic solution to end the conflict.

If the global community doesn’t act, desperate people will continue to try to find solutions for themselves at huge personal risk. This includes a rickety boat heading out to an unforgiving sea.

We simply cannot stand by and do nothing. History and humanity will judge us harshly if we do.

Learn more about CARE’s response to the Syrian refugee crisis.

Quiz: How much do you know about women’s rights?