To vaccinate a child or not? It’s been a hotly contested debate recently in some parts of the world.

In Canada, vaccines are easily available and have without a doubt helped save many lives.

However, thousands of kilometres away, here in South Sudan access to adequate health services is extremely limited. It has been estimated that one primary health clinic serves as many as 7,000 people. Many parents are not even given the choice as to whether they wish to have their children vaccinated.

In these circumstances, disease outbreaks could have devastating consequences, even more so in the midst of a conflict that has displaced 1.5 million people.

As a member of CARE’s team in South Sudan, earlier this year I travelled to remote communities in Guit, a county in Unity state, cut off by fighting since conflict broke out in December 2013.

Working together with the International Rescue Committee, our mission was to vaccinate the county’s children against measles and polio, and deliver much-needed medical and nutrition assistance.

I spot a herd of elephants on the helicopter ride to Guit. I’ve been working in South Sudan for over a year now and it’s the first time I’ve seen so much wildlife. The view is mostly swamps. They look beautiful from above because they’re covered in lilies and different vegetation, crisscrossed by vein-like rivers.

The County Commissioner greets us. His new “office” is under a tree because his original office was destroyed. When I visit the old office later, I note particular attention has been given to breaking every single floor and wall tile. The walls are a showcase of local graffiti, mostly of soldiers and cows. 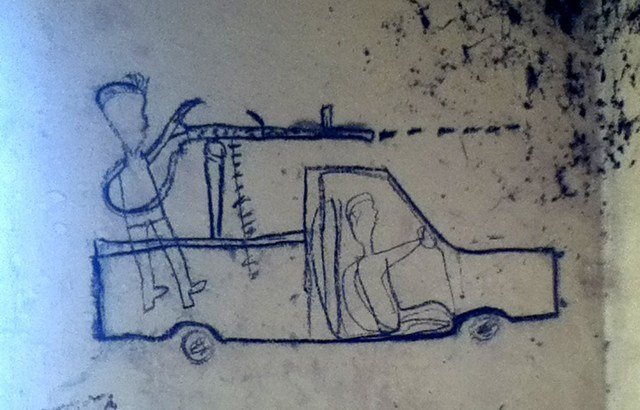 The local health clinic is in surprisingly good condition, although clearly looted. There’s very little equipment and shipping containers that once housed laboratories or refrigerated vaccine stores have been destroyed by fire.

The town itself seems like a skeleton, I can’t see a single tukul – small, round huts common in South Sudan. There’s a small market selling mostly salt, sugar and a few meager household items. The school is now a barn, inside is nothing but goat and cow dung. I’m later told that most of the remaining structures in town are used to house animals, so people sleep outside under mosquito nets. Oddly enough, seemingly pristine power lines lead to a massive generator, which I’m told could work, but there’s no fuel in Guit.

There’s not one vehicle to be seen in Guit town, not even a bicycle. Travel from this point will be on foot, carrying everything by hand – and canoe for the swamps I saw from the chopper.

The logistics for our mission are mind-boggling, as they so often are in this country. The Health Department has mobilized 90 vaccinators, supervisors and assistants. We’ll be working out of a handful of sites across Guit county, so we need helicopters to drop supplies – including vaccines stored in coolboxes – at strategic hubs along the way. From there we’ll be using porters, carrying the gear on their heads which is pretty much the only way of moving anything in Unity state right now.

We walk to Nimne, a small village that will serve as a hub. It’s a full day’s walk, crossing five rivers, some with water up to my chest. I eat a local maize dish called walwal, prepared with sour milk. It’s delicious! One of my South Sudanese colleagues teaches me some of the local language, especially the greetings, which are so important here.

Breakfast is kof – millet porridge – with fresh milk. Today is the day my colleagues have been waiting for: the Great Swamp Crossing. They think I’m not tough enough. Don’t they know I grew up in the Lakes region of northern Canada? I don’t disgrace myself too much as we cross yet more rivers, carrying the canoes across thin strips of dry land.

Our destination, Watyotne, is like a Shangri-La! It’s a beautiful island village with huts close together, and filled with military. I arrive to a hero’s welcome, people are cheering and applauding. I don’t think anyone believed that a foreigner would or could make the journey.

I enjoy a shower with a view of towering papyrus stalks over the river. Watyotne is a crucial point in our vaccination campaign so we set the plan for the next day. The night ends with a fat goat from the local commander. 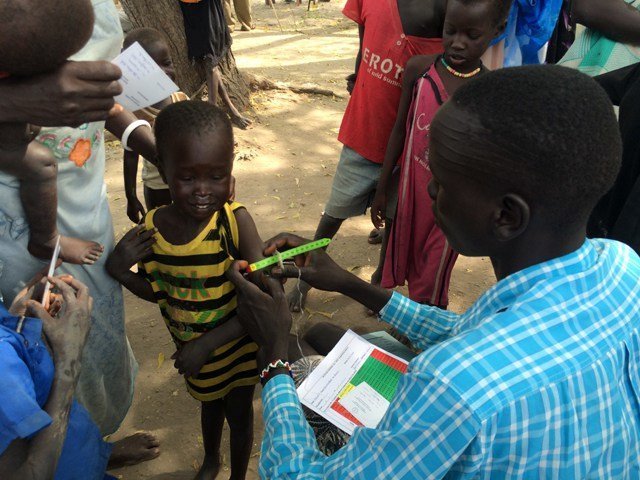 Our vaccinators are set up under a tree, surrounded by dozens of people – kids, moms and passers-by keen to make the most of the entertainment. In addition to measles and polio vaccinations, we’re testing for nutrition so the process begins with a MUAC test – Measuring Upper Arm Circumference – the measurement band placed around the upper arm to test the level of nutrition. It’s simple, painless, and quiet – unlike the next step.

The vaccination begins with Vitamin A drops in the mouth, followed by the polio vaccine. Then the big one – the measles jab. You know when someone’s been jabbed because the wailing begins, first the child being vaccinated, and then the rest take up the chorus. It’s a noisy exercise, in every village we’re working. 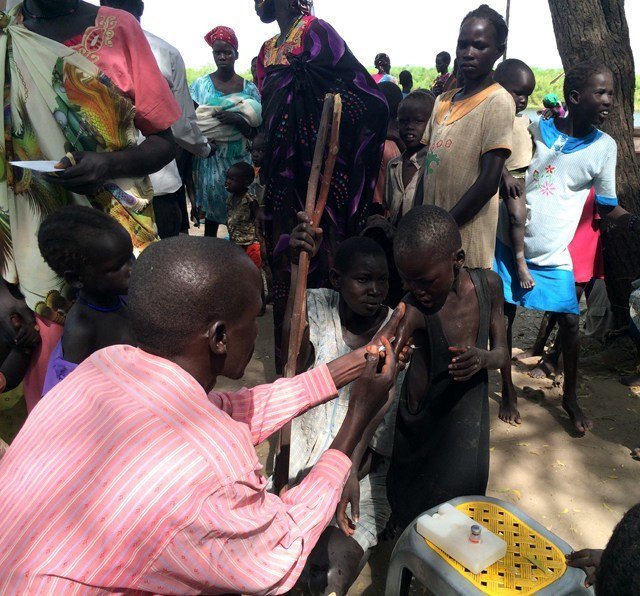 I’m shocked by the amount of children I see on the river, flocks of them, passing through deep water on their way to Bentiu, the nearest UNMISS (UN Mission in South Sudan) base and currently home to more than 43,000 internally displaced people, or IDPs. There are no boats, and I see one or two young women shepherding eight to 10 kids floating by in wash basins, sometimes they’re in tarpaulins shaped as dinghies.

It’s precarious to say the least, all so they can make it to the biometric registration being held at the base in Bentiu this week. The UN is conducting a headcount of the IDPs currently housed at eight UNMISS bases around the country. It’s biometric because it involves leaving a thumb print on a machine much like those found at airports.

The registration is a way for aid agencies to make sure they’re delivering the most appropriate response at each location. If people don’t get registered, they won’t be able to access food distributions and other humanitarian assistance. I can’t help but think how much danger the kids are exposing themselves to just to get there.

We retrace our path back to Guit. On the way, I see even more children streaming towards Bentiu. I must have seen hundreds by now. I arrive in Guit exhausted. Constantly removing my shoes to cross rivers, and all that mud between my toes, has made for some lovely blisters. Our logistics magician serves up a hot meal. I sleep well!

The walking continues the next day, this time it’s five hours to a village called Kadet. We arrive to find a chopper’s dropped out supplies at the “airstrip” another four-hour walk away. We decide to go the following day.

We walk to the “airstrip” through a series of those rivers and streams that I’d thought looked so pretty from the air a week ago.

Our only means of outside communication is via satphone and our battery is low. Our base in Bentiu calls to say a consignment of medical supplies is arriving via chopper the next day. It’s a bad line and I can’t figure out where the drop will be.

Amazing as it may sound, we come across a team from the World Food Program, preparing a food distribution for a nearby community. Even better, they have a solar satphone charger so we’re finally able to communicate with Bentiu who tells us a chopper will arrive in Guit the following morning. It’s the first bulk shipment of medical supplies to arrive in Guit for almost a year so it’s important we be there.

The walk to Guit seems never ending. The last part, during the midday heat, is the hardest, and then we run out of water. But we need to make it to Guit for the chopper and I’m constantly scanning the sky to see if it’s coming. We joke that the chopper will probably arrive just as we reach the water pump. And it does.

Our mission has ended. I am in nothing short of awe of the public health officials I’ve met in the field, dedicated men and women who work with the bare minimum.

We’ve vaccinated almost 20,000 children, the medical and nutrition supplies delivered. We pack up camp and wait for the chopper. I’m thinking about a cold beer.

Your support enables CARE to provide vaccines and other life-saving aid to the most vulnerable people in the world.