Zambia: A pleasant surprise at a community water project 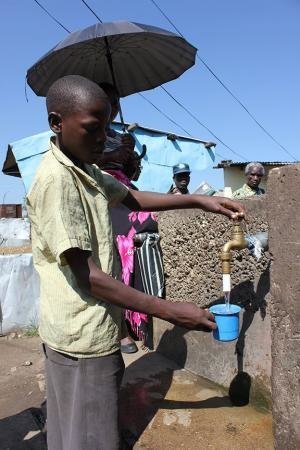 After 15 minutes heading north on the Lusaka city roads out of Zambia’s capital, we turn right into the Kanyama Compound.

The CARE staff truck careens over the uneven dirt road, dark red mud and rock. I am reminded that the mineral-rich and rocky formation of Zambia has played a central role in its story.

After the very lucrative Zambian copper industry collapsed in the 1970s, thousands of people lost their jobs and left the city. The government, which had invested heavily in copper and suffered irreparably in the copper crisis, could no longer afford to provide many basic services – including water and sanitation.

To escape crushing food prices and a struggling capital city, many poor families established what were meant to be temporary settlements in Kanyama as early as the 1960s. Initially illegal, the settlements were unplanned and haphazard with no planning or provisions for water or sanitation.

The people never left and the water never came.

Generations have grown up here –as many as six or seven families live in one modest shelter. And people are still coming. Kanyama Compound is now 15 square kilometres and growing, and the patchwork of settlements is home to more than 300,000 people. Only half of those have access to clean water.

We pull up through a gate, under the shadow of a large water tower. Some seemingly rudimentary equipment – bicycles, water jugs, carts – are parked outside of an office building. A man steps out onto the porch and waves us into his office.

Laban Kateya is the manager of the Kanyama Water Trust. His office is filled with charts, plans and photos of the pit latrines that he and his staff work to install in the compound.

“Kanyama is very rocky,” he explains. “So it’s difficult to dig.”

Only 1,000 shelters in the compound have proper pit latrines. Many latrines are often situated too close to shallow wells, which then are prone to contamination during rainy-season floods.

“Before, people suffered a lot. Women were left to get water at night … But the Water Trust brought people together.”

He goes on to explain that the Water Trust is a partnership of several stakeholders – CARE, the city of Lusaka, water and sewage companies, and a few others. It was established in 2002 to provide clean water, latrines and wells to the families who have lived here for more than 50 years.

My CARE colleague Maureen proudly notes that “absolutely anyone in the community” can talk to Laban about anything they need and he will respond. Laban laughs.

“He grew up here,” she continues, “and still lives in Kanyama. This is his home.”

We leave Laban’s office to admire some of the simple, but life-changing technology that services Kanyama.

A mobile pump, used to exhume the latrines, sits on a bicycle. The bicycle helps to transport the waste to the biodigester – a large structure, built into the ground, which processes the waste to create gas and manure for the community’s use.

Thanks to the investment made by Water Trust partners, including CARE, there are now four boreholes in Kanyama. The boreholes feed five elevated tanks of water which are piped to more than 1,000 taps in the compound that provide clean water for the residents to drink.

The clean water taps are staffed by people who live here. The furthest anyone now has to walk for water is 200 metres. Each household is issued a card that entitles them to two free jerry cans of water and after that people can pay 38 cents per can.

As Laban stares up at the water tank, he notes that he hopes to install two more water towers in the year to come so that even more people will have access to clean water. When I ask if that’s something that CARE will help with, he seems a bit surprised.

My CARE colleagues smile with pride. I am somewhat embarrassed to admit that I had blindly assumed that CARE was stillsomehow supporting all of the work, the progress and the life-changing improvements that I had just witnessed.

For ten years, the struggling but determined people who live here have taken the initial training and infrastructure provided by CARE and the other Trust partners, and they have continued to build – on their own, as a community.

“It’s now run entirely by the community. We’ve just added to the project, we haven’t subtracted anything.”

For me, it’s a great lesson in sustainable development. This is how it’s supposed to work. For the people of Kanyama, CARE’s investment is long over, but their ability to better provide for themselves will forever be with them.

And, of course, the water. 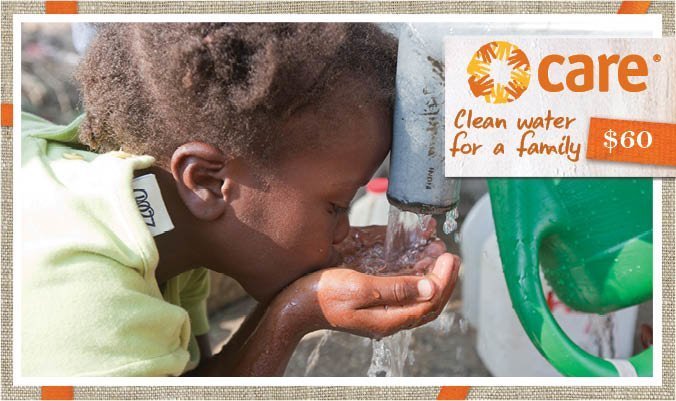 Some women and girls have to walk long hours every day just to collect drinking water. Give a gift that will provide a family with clean and safe water so they can stay healthy and use their time to go to school or earn an income.