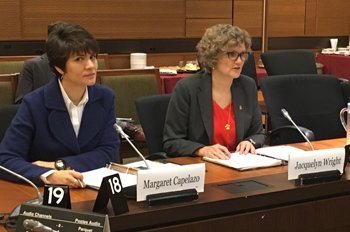 On Thursday, March 10, CARE Canada Vice President of International Programs Jacquelyn Wright and Gender Advisor Margaret Capelazo spoke before the House of Commons Standing Committee on Foreign Affairs and International Development on the topic of Women, Peace and Security.

Much has been achieved in the fifteen (15) years since the adoption of Resolution 1325. Thousands of women have used the Women, Peace and Security agenda to mobilize political action and resources in support of their rights and participation in peace and security efforts.

Despite the huge volumes of policy statements and reports that have been issued on the Women, Peace and Security agenda, however, the original and innovative spirit of Resolution 1325 has, however, often been lost in the process. Women’s participation in discussions about how to respond to crises and rebuild communities remains inconsistent and often tokenistic.

There are, however, a number of practical steps Canada can take to translate the Women, Peace and Security Agenda into impacts for women on the ground. CARE Canada offers three recommendations towards that end:

1. The Government of Canada should consider appointing a high-level authority on gender-responsive foreign policy.

A respected and visible Canadian authority could be mandated to:

2. The Government should launch a cutting-edge, Second Generation National Action Plan on Women, Peace and Security.

The Plan should have the status of a policy directive and be:

Reports on the implementation of the Women, Peace and Security Agenda have repeatedly called for these elements to be included in National Action Plans.

Adequate funding for women’s civil society organizations is critical for building local capacities to engage in decision-making, and to respond in emergency situations. The Secretary-General, for example, has committed the United Nations system to allocate at least 15 percent of funding for conflict affected areas for initiatives whose principle objective is gender equality and women's empowerment.

Gender, age and diversity disaggregated data, meanwhile, are critical for quality program design, as well as for fostering accountability for investments, results and impacts.

The World Humanitarian Summit in Istanbul on May 23-24, 2016, is conceived as a means to establish new ways to address global humanitarian challenges. A focus on ‘women and girls’ at the Summit provides an opportunity to revitalize the Women, Peace and Security Agenda. Canada can lead these efforts by championing initiatives to empower local women’s groups, and ensure their involvement in emergency preparedness and humanitarian assessments, programme design, quality and accountability efforts.

As our National Action Plan comes up for renewal, amid new international attention on sustainable solutions to the world’s most pressing challenges, Canada has an opportunity to reinvigorate its commitment to help ensure women and girls are meaningfully engaged in developing and delivering responses to the multiple, protracted crises confronting the world today, and to ensure future policies and programs are driven by women’s voices and aspirations.