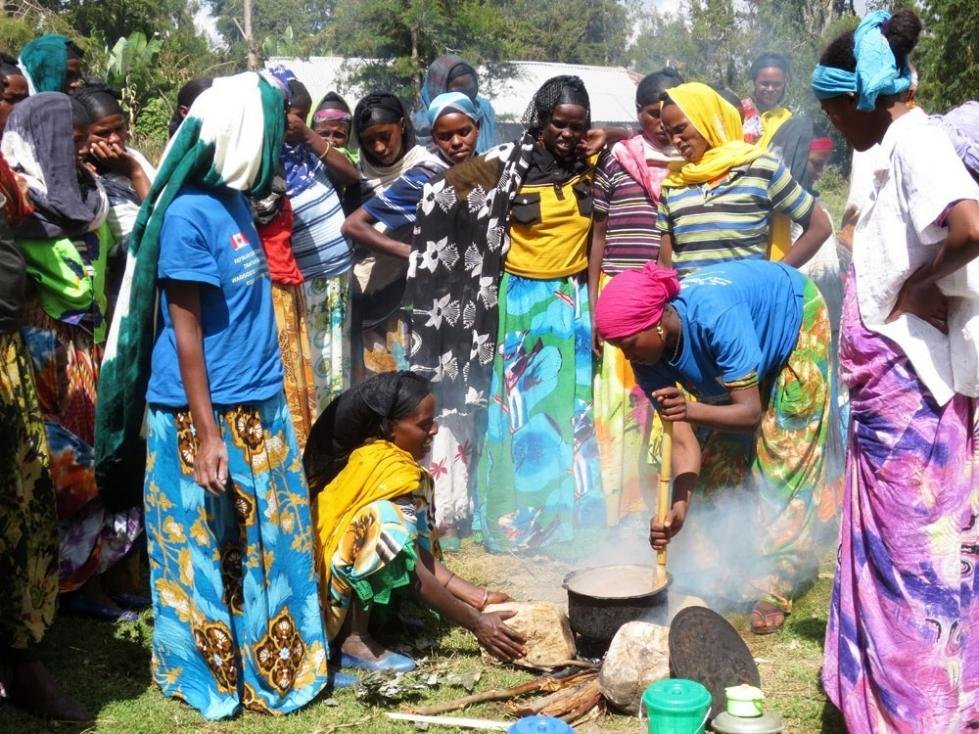 Last fall, I visited a remote health post in the village of Gudina Muleta in the eastern highlands of Ethiopia.

At the health post, a one room cement structure, there were two health extension workers whose job it is to tend to the basic health needs of the community: providing basic medicines; monitoring the health of the population; and supporting the community with basic public health messages and training.

They work primarily with two community groups, known as the “Women’s Development Army” and “Mothers-to-Mothers” (M2M). Each group typically has about 25 members.

Over the next half hour, some 30 women gathered around the health post. They were members of a mothers-to-mothers group with whom CARE is working as part of our maternal and child health project in Ethiopia. Mothers-to-mothers groups are essentially support groups through which CARE spreads our messages of nutrition and health.

With the help of the health extension workers, the women in these groups learn about the nutritional requirements of expectant mothers; the importance of breastfeeding; the benefits of a diversified diet; and how to prepare nutritious, semi-solid food for toddlers. At the same time, they were also saving small amounts of money (5 birr/week, about 25 cents) using the village savings and loans association methodology they also learned from CARE. 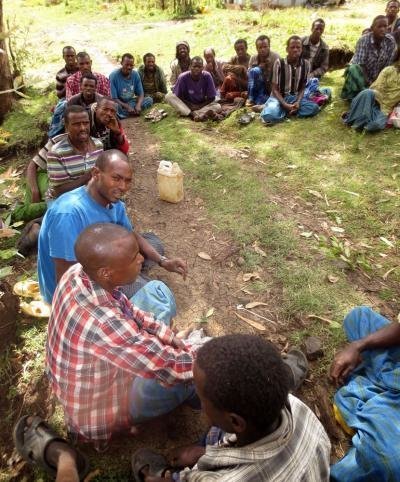 In time, a group of men gathered a few metres away. This was a support group for the mothers; their leader, a local Imam named Sheik Shemshedin Arif Adam.

As part of our project, men’s groups also receive training around maternal and infant nutrition so they can share that learning with others. More importantly, they can support their wives when it comes to breastfeeding and contribute to ensuring better nutrition for expectant mothers and newborns.

Women often face barriers to changing their practices, even from within their own family, so it can be critical to have their husbands supporting their decisions regarding the early start of breastfeeding, exclusive breastfeeding for six months, gradual introduction of semi-solid foods and other matters.

“The most significant benefit”

I spoke with a young mother, Alfiyah Abdulahi Abrahim, who is 23 years old; her baby, Kadir Abdella is 14 months. She told me she had fully intended to give birth at the health centre, but there was no transport available so she gave birth at home with the help of her neighbour, a traditional midwife. Thankfully, the baby was delivered safely and was healthy.

“I immediately put my baby to my breast since I learned about the importance of colostrums,” said Alfiyah.

[Colostrom is a yellowish liquid especially rich in immune factors and is secreted into breast milk a few days before and after childbirth.]

“My baby has not had any health issues since she was born. The only time I took her to the health centre was to get her vaccinated. I have learned about colostrum and about breastfeeding until the baby reaches six months. I also learned about nutritional foods and complementary feeding once she turns six months, preparing healthy food (porridge), which we can do using ingredients we have available here in the community.

“My other child, who was not breastfed the same way and did not receive the nutritious porridge, which we have learned to prepare, got sick more often and had to go to the clinic.

“For me, the health and sanitation learnings have been the most significant benefit we have gained from the Muskoka Project.”

The women, the community and the local health officials all refer to the work that CARE is carrying out as “the Muskoka Project” – as these projects have all been funded thanks to the support of the Government of Canada through the 2010 G8 Global Muskoka Initiative.

Alfiyah’s husband is going to school and is a student in grade 9. In the evenings, he participates in a men’s group, what they call the “Men’s Development Army,” which teaches them about healthy mothers, healthy children as well as discussing issues affecting their community.

Through my conversations with Alfiyah and other mothers that day, it was clear that they had acquired a much greater understanding of health and nutrition – knowledge that will help ensure healthier mothers and babies. 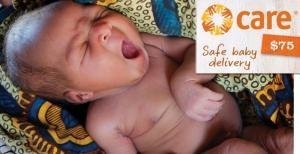 YOU can provide a safe baby delivery today!