Poverty affects almost three-quarters of the Honduran population. This lush, tropical country – a resort destination for many vacationers – is easily one of the poorest nations in Latin America.

In rural regions, conditions can be especially harsh. There are few job opportunities and access to food and clean water is sparse and expensive. Up to one in every three children in these areas suffers severe malnutrition. Contaminated water and the viruses it carries have become the leading cause of death among the general population, and the second most common cause of infant mortality.

At CARE, we believe in finding sustainable solutions to extreme poverty in countries like Honduras. One of the most important ways that we do this is by empowering local Honduran children as agents of change within their own communities.

As part of our PROSADE project in this country, CARE provided schoolchildren with the tools to promote healthy habits and better sanitation among their peers.

We partnered with five local schools in southern Honduras that were severely lacking in proper hygiene and sanitation systems. The project aimed to equip these schools with safe, clean, private and culturally appropriate restrooms for students and staff – for example, providing separate facilities for boys, girls, students and faculty. We also worked with local teachers to incorporate health and hygiene lessons into the curriculum.

One of this project’s foremost activities, however, was the establishment of children’s sanitation committees. An exercise in citizenship, democracy and gender equality, these committees are composed of students in grades four through six. They are elected to the job – both girls and boys.

Together, these students maintain school restrooms and green spaces; preserve a reservoir of clean water; obtain toothpaste and brushes for their peers; participate in a local plumbing workshop run by professional plumbers; and lastly, perform the “Juanita y la gotita” play, which translates as “Juanita and the drop of water,” for the younger students, as a way to teach others what they have learned.

Overall, CARE’s PROSADE project will reach thousands of Honduran families with better nutrition, water and sanitation. Just as the participation of Honduran communities is integral for the project’s success, so too are CARE’s Canadian partners vital in our ability to coordinate such activities as children’s sanitation committees.

Our work in these schools was undertaken with the generous support of eight Canadian Rotary Clubs, the Frank Flaman Family Foundation and the Macquarie Foundation, which donated more than $55,000 to empower these students towards better health.

They may be one of the most vulnerable populations in a poor country, but with the support of Canadians, Honduran schoolchildren are becoming powerful promoters of change and a better future for their communities. 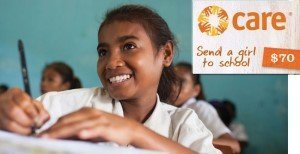 Send a girl to school!

Staying in school and becoming a teacher: Maram’s story