The Forgotten Girls of South Sudan

The news has been dominated by three international crises: Ebola in West Africa, ongoing conflict in Gaza and the rise of ISIS in Iraq and Syria.

Yet there is one international emergency that seems to have gone missing.

In the world’s youngest country of South Sudan, tens of thousands of people have been killed by war, hunger and disease, and more than 1.8 million have fled their homes and villages in what the UN has called “the world’s worst food crisis.”

The situation for girls in South Sudan is particularly horrific.

According to a recent CARE report, The Girl Has No Rights: Gender-based violence in South Sudan, more women and girls are engaging in sex in exchange for food or water for their families; and rape and sexual assault have become a weapon of war.

We would like to introduce you to some of the girls and young women CARE’s team has met.

“We have nothing to eat. I just hope peace comes, so that we can get the possibility of going to school, for a better future.”

Nyabel is the oldest of seven children. When fighting exploded across South Sudan in December, soldiers attacked her hometown in the far north of Unity State.

Hundreds of men, women and children were killed. Cattle, goats and other animals were rounded up and butchered, homes were torched to the ground. Nyabel’s aunt and uncle were both killed in front of the family.

Nyabel and her family ran, with Nyabel carrying her younger brother and an eight-litre jerry-can. Some six days later, exhausted, thirsty and badly malnourished, they arrived in the town of Yida, where they sought refuge with a family friend, where they now live.

Nyabel can no longer attend school and she says she and her brothers and sisters are always hungry.

“I really feel pity about what’s happened to my life. I was going to school. Now I’ve lost this year without any study.”

“Before the war, we were not worried. We had our belongings, we were cultivating crops, we had enough food. We could take our goods to sell and we could buy clothes.”

“Now, I have no option of going anywhere, I just want to have a permanent place to live. While I can no longer go to school, I do hope that my daughter can when she is older.”

Arek, pictured above with her sister and daughter, were present when soldiers attacked their community in Panang, in South Sudan’s Unity state, killing their uncle, burning their home and possessions to the ground and slaughtering their livestock.

Together with their blind aunt Mary, Arek, her sister and daughter made the two-day walk from Panang to the town of Yida, where they now sleep on the floor of a home belonging to a stranger who took them in.

Arek says they have very little food, and her daughter is now always hungry. They are dependent on the edible plants they find in the bush and on handouts from others to survive. CARE has provided Arek and her aunt Mary with seeds to help grow much-needed vegetables such as tomatoes, eggplants and cabbage near the community that has become their home.

Arek says life has changed so much in just a few short months, and her biggest hopes now are just to survive and find a more permanent place to live. 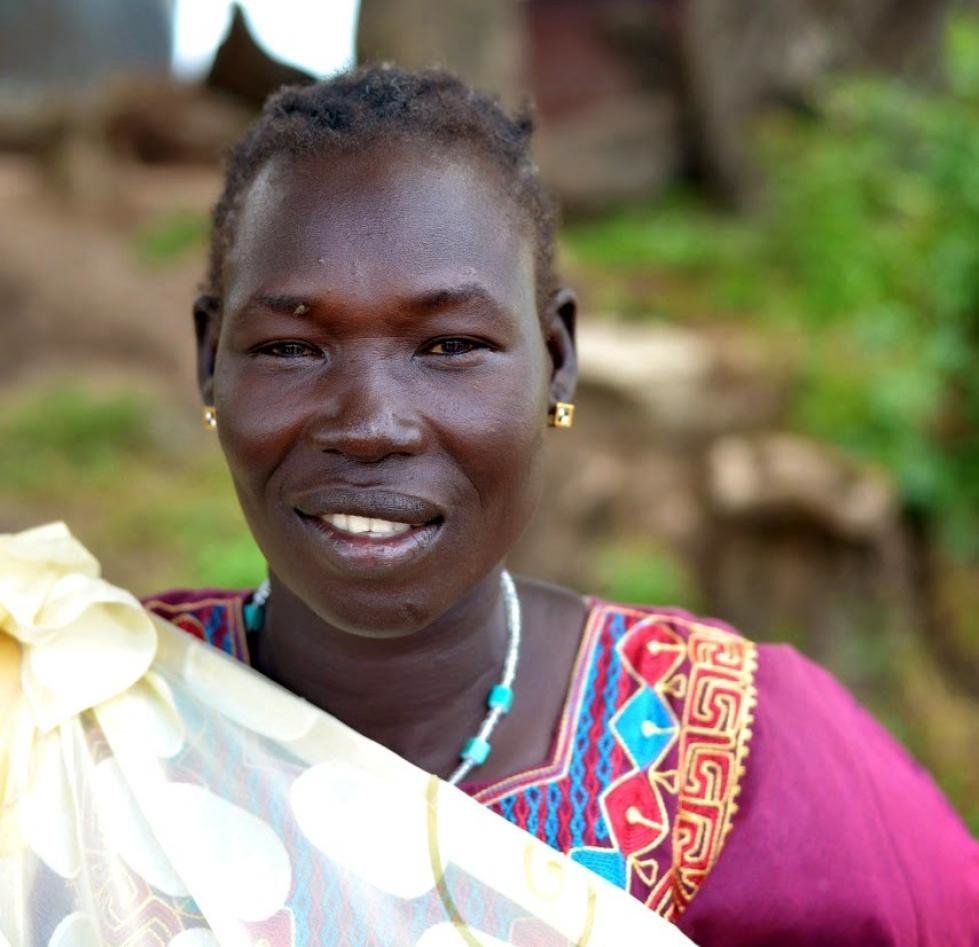 “We have to cope. This is our life now.”

Angelina suffered a horrific loss when fighting ripped through her hometown of Malakal, in South Sudan’s Upper Nile state, last year. Angelina’s sister and five nephews drowned after jumping into the River Nile in an attempt to flee.

Angelina says she never stops thinking of her sister and nephews, but despite her loss, she has tried her best to look forward.

Through CARE, Angelina has become an advocate for clean water and hygiene to help support other families in the Malakal community. Each day, she walks, buckets-in-hand, to the banks of the River Nile to collect water and purify it using

CARE-provided water purification sachets, to then share clean water with the community.

Angelina says she’s taken on this role because she has experienced first-hand the dangers of drinking unpurified water in times of desperation.

“Before the crisis, water vendors used to travel through town with donkeys, carrying water for people to take,” explained Angelina. “But then when the crisis happened, all the businesses shut down, and people were getting very sick with diarrhea and cholera.”

She says water is the most basic of needs, and she’s proud to be helping to reduce sickness in Malakal. 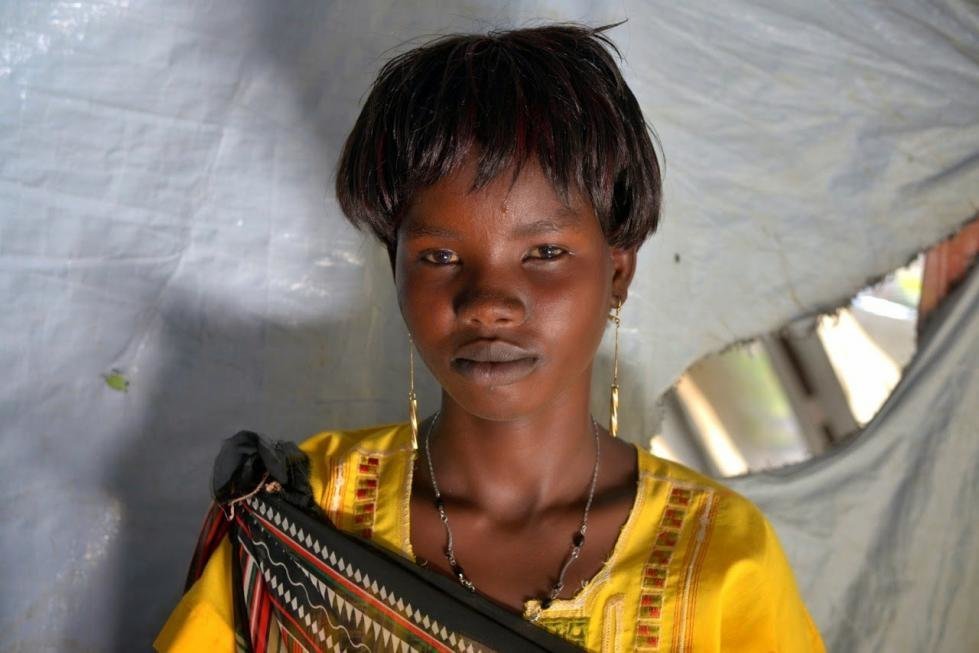 “Not knowing where [my siblings] were, I couldn’t eat, I couldn’t shower. Knowing how [the soldiers] were firing their guns, I’d assumed they were dead. I just wanted to know where they were.”

In early January this year, the town of Malakal exploded with the sound of bullets and rockets as opposing forces attempted to capture and re-capture the town. Muna quickly went outside to gather water from the nearby water pump, knowing that she and her family would potentially have to stay in indoors for many days.

As she went outside, a bullet hit a table next to her, leaving her paralysed with fear.

“It was dark. I was so terrified, and immediately, our house was full of soldiers,” said Muna.

Muna’s fled to the nearby bush for some days, before seeking refuge in the UN’s Protection of Civilian site, where she is still lives. In the panic of that January night, Muna became separated from two of her younger siblings. She has not seen them since.

She says not knowing where her younger siblings are has left her deeply traumatized with grief.

Thankfully, some months later, another relative who also fled during the January attack returned to tell Muna that her siblings were safe, but are now living in a refugee camp in Ethiopia. 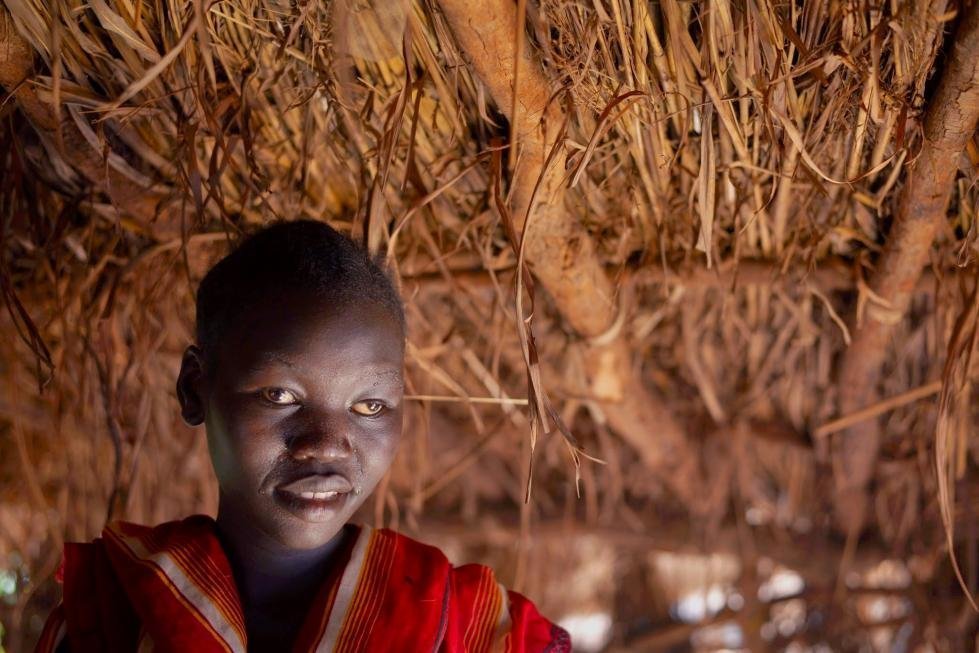 “Everyone ran, even the families of the children killed ran; they just had to run away, we were all so scared.”

When fighting broke out, Haja ran 20 kilometres overnight with her family from her home of Yida, to a nearby town, where they stayed until the battle subsided. Haja and her family were all safe, but she said two children from neighbouring families were killed in the crossfire.

As the eldest of six children, Haja says she feels a big responsibility to protect her younger siblings. She says as a refugee from neighbouring Sudan who has spent virtually her whole life surrounded by war, her only real sense of hope is for peace to come to South Sudan.

“We don’t know how far this war is going to go,” said Haja. “I’m just praying that peace comes to South Sudan. We need to be safe.”

*Name have been changed for security reasons.

CARE is providing healthcare, sanitation and the means to grow food to families living in South Sudan’s three hardest-hit states of Jonglei, Unity and Upper Nile, and has already reached more than 250,000 people. Learn more.