Yemen: The Conflict Needs to Stop

By Theo Alexopoulos, Deputy Director of Security at CARE

With war raging for a year now, Yemen has been a very unsafe and difficult place for aid workers to travel to. But I recently visited Yemen and saw how desperate the situation has become for millions of people. In Northern Yemen, I saw many longing faces of little children…faces longing for water. These children often miss school to wait in long queues for water trucked in to the villages.

There was one little boy standing alone looking lost at a distance from the crowd. His name was Mohammad and he was sick, but sick from what? Was it due to a lack of water? Hunger? Or was he ailing from some untreated illness? It could be any of these reasons, but when I got down on my knees to kiss his hand and say hello, I managed to score a killer smile from him. And I couldn’t help but wonder what lies ahead for him and other children? As a father of two young girls, it hit me hard. The needs in Yemen are SO great, it’s scary. I can’t help but feel angry because there is no end in sight to the conflict and grown-ups seem too busy vying for power than protecting their beautiful boys and girls.

As I stood with the children waiting to collect water, I asked them what games they like to play and football was the immediate response. But I thought twice about encouraging them to play football, when my Yemeni colleague said, “Theo, when I was a boy, I worked in conditions such as this – NO water. My intake was strictly rationed by my mother to a cup a half cup a day. Running around chasing a football in this heat makes you thirsty. Even if you were lucky to have a ball, playing the game was not always the smartest thing to do.”

Yemen is a country where water is a scarce resource, but now since the onset of the conflict, those water shortages have skyrocketed even higher with more than 19 million people lacking access to water and sanitation. So yeah, I won’t be trying to play football with the kids. 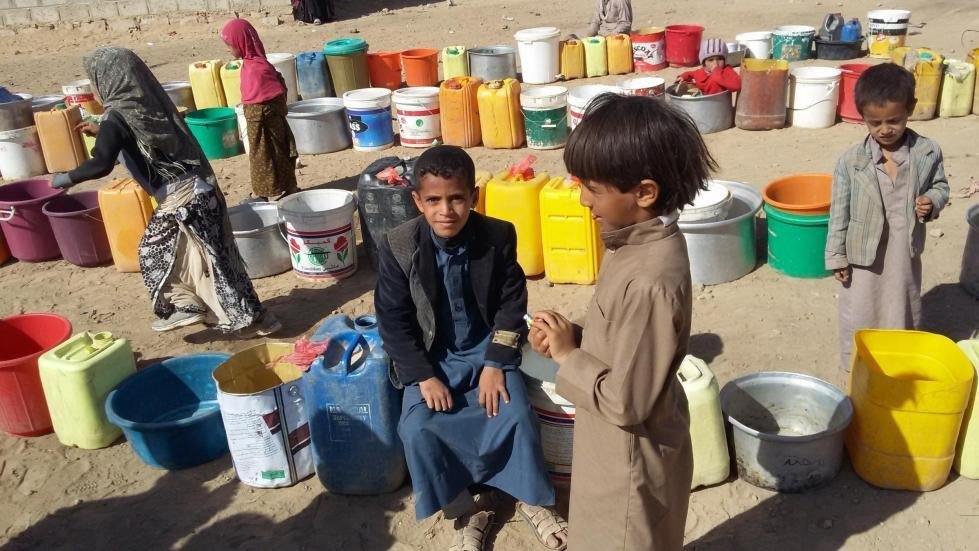 What can be done?

Fighting rages across Yemen, and most of the world has no idea. Our staff live and work under daily bombings (windows blown out, building shaking). Compounded by threat of car jackings, theft, looting, kidnapping and detention. It takes its toll despite our efforts to keep staff safe from harm and prevents us from helping as many Yemeni people as we could.

CARE has been helping those in need in Yemen for many years and have humbly continued their work throughout the conflict. We’re rehabilitating water sources and providing water tanks so women and children do not have to travel long distances to collect water. To assist people in making ends meet, CARE is distributing food and cash vouchers to families so they can purchase in the local market the food and hygiene items their family needs.

But the scale of need is immense. Over 21 Million require life-saving assistance. I mean, can you even wrap your brain around that figure? And the solution to this crisis is not a humanitarian one, but only a political one to stop this violence and bring peace to Yemen. It seems the international community is struggling too. Within the Middle East there are many other ongoing conflicts with their own challenges, but we cannot allow ourselves to ignore this disaster. A disaster of epic proportions.

Those children I saw longing for water, longing for an education, longing for a future…they deserve a chance. It’s time to stop the violence and help the Yemen people and their youth hope for the future.