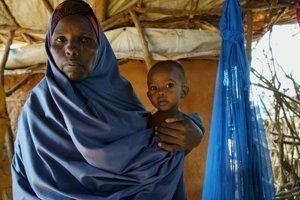 International humanitarian agency CARE calls on the rights of refugees to be at the forefront amidst discussions on the future of refugees living inside Kenya.

Earlier this month, the Government of Kenya announced that it would disband its Department of Refugee Affairs as a precursor to eventually closing refugee camps in the country.

Such a move could impact upwards of 350,000 people living in the world’s largest refugee camp in Dadaab.

CARE has been in Dadaab since its formation in 1991. We continue to work in close collaboration with UNHCR, other UN agencies, as well as government and non-governmental partners in addressing refugee needs, and we are monitoring this developing situation closely.

It is important to note that Kenya has generously assisted thousands of refugees forced to flee conflict in neighbouring countries for many years. CARE recognizes the Kenyan government’s support, as well as the challenges faced in hosting a large refugee camp for a quarter of a century.

CARE was one of the first aid agencies operating in Dadaab 25 years ago and continues to work in the sectors of water, sanitation and hygiene, education, gender equity and development, livelihoods and food distribution.

CARE firmly believes in the rights of refugees to a safe and voluntary return and to live securely and with dignity. As such, we encourage the voluntary return of Somali refugees from Dadaab when and where it is safe and possible to do so, but note that with ongoing instability and the long term rehabilitation needs inside Somalia, there will likely continue to be a need for a safe space for Somalis and refugees of other nationalities within Kenya.

At the same time, aid agencies, the UN and the international community need to look seriously at the nature of protracted refugee situations, develop longer term solutions to make the lives of refugees in exile more bearable, and find the political will to end the conflicts that prevent safe and voluntary return.

We call on global leaders to attend the World Humanitarian Summit in Istanbul May 23-24 and to make strong and meaningful commitments to ensure those forced to flee are not left in limbo for generations on end.

CARE has Canadian spokespeople available in Kenya. To arrange an interview, contact: