Hurricane Matthew in Haiti: More people will die if we don’t act now

As the impacts of Hurricane Matthew in Haiti started to emerge, the damage from the storm immediately started being compared to the damage of the 2010 earthquake. I could not imagine that a hurricane could possibly leave comparable levels of damage as the 2010 earthquake. But then I went to Jeremie, the capital of Grand’Anse that hardest hit by the storm, and saw firsthand the shocking level of destruction this hurricane left in its wake.

It was a nine hour treacherous journey from Port-au-Prince to Jeremie. The further our car headed west, the worse the destruction became. Green, leafy trees and lush grass turned into barren wasteland of rubble and debris. We stopped first at an evacuation center in Les Cayes where CARE was distributing hot meals and clean drinking water. I asked a group of women there, “When will you return to your home?” One of them shrugged and replied, “We have no home to return to.”

It was hard to imagine the destruction could get worse, but as we drove into Jeremie, it was an apocalyptic scene. Every house was damaged or destroyed. One man I spoke to said that the people who still have a home standing are hosting people who lost their homes.

Nearly everyone has lost everything. They’ve lost their homes, as well as their crops and livestock. Many have also lost loved ones. People have no food. Water sources are contaminated, so they have no clean water, meaning cholera cases are rising at an alarming rate. With everything destroyed, there are no economic opportunities for the people, except for selling wood from the collapsed trees.

There are over a million people in urgent need of help. Seeing the level of desperation amongst the people, I felt a sense of urgency that we must do more now. The needs are immediate and the recovery will be long. 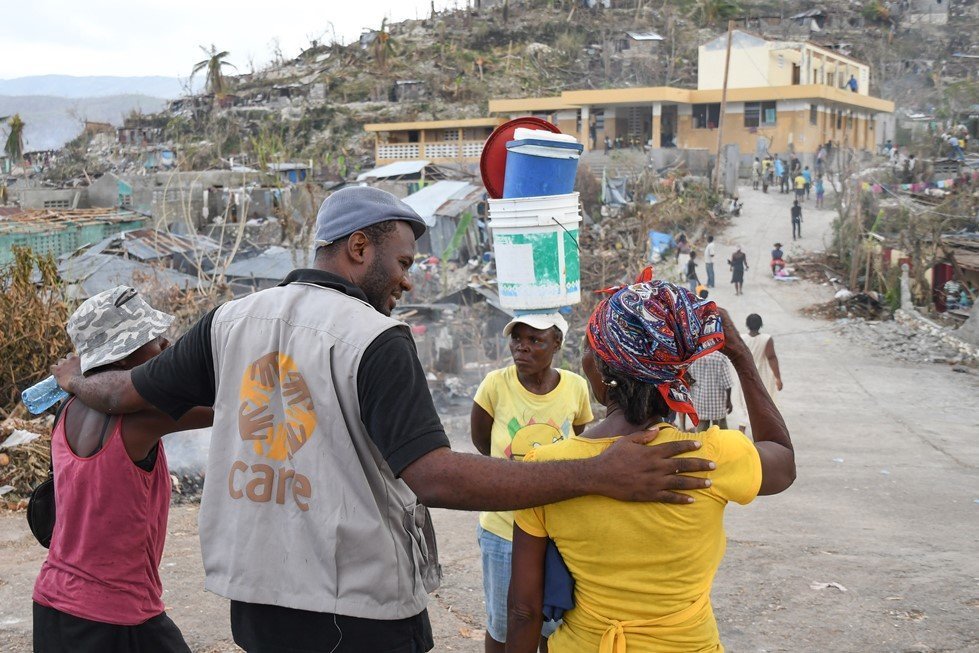 I understand that many people are skeptical of giving to Haiti after some of the negative events that occurred following the earthquake. But the Haiti of today is much different than the Haiti of 2010. First, the current transitional government is focused on creating a stronger democratic structure that is more accountable to the people. This government managed to prepare for the presidential and parliamentary elections scheduled for October 9th, exclusively with National Treasury funds without any international support. Second, while in 2010 the government was almost completely absent from coordinating aid deliveries to earthquake victims, this time they proactively took responsibility to prepare and coordinate with the humanitarian community. Lastly, not all humanitarian organizations wasted funds after the earthquake. CARE publicly reported how it successfully used the $113 million raised to help Haitians recover and rebuild from the earthquake over a five year period.

When you consider the number of recurring disasters that Haiti has endured over the years, the resilience of the people is incredible. Following Hurricane Sandy, CARE’s Village Savings and Loan Associations located in affected areas distributed over $43,000 from their own savings to rebuild their communities. They then started saving again so they’d be ready to weather the next crisis.

But Haiti is still the poorest country in the Western Hemisphere and incredibly vulnerable to natural disasters. Even wealthy countries, like the US, take years to rebuild when hit by a disaster of the magnitude of Hurricane Matthew.

My hope is that people will allow their compassion to overpower their skepticism. More people are going to die if more resources don’t start coming in. Time is of the essence and we must act now. It truly is a matter of life and death.

You can help save lives in Haiti by providing emergency food, water, hygiene kits and shelter.