"We were so scared": Fleeing conflict in Iraq

Even before the Mosul offensive began, there were 3.3 million people internally displaced in Iraq. CARE plays a critical role supporting those who have already fled conflict in other parts of the country, notably those who escaped the Sinjar Mountains region in 2014.

They took the beautiful girls, Goze* tells me from her temporary home in a refugee camp in northern Iraq.

“I don’t know what happened to them,” she says unconvincingly.

I’m later told the brutal reality of what happened to her neighbours at the hands of militants: the women were raped, their husbands killed.

It is a harrowing story repeated countless times when speaking to families who live in Berseve 1 refugee camp, a tent city home to more than 10,000 displaced people.

Most here were forced to flee their homes around the Sinjar Mountains two years ago when armed men overran their town, inflicting horrific violence in the process.

CARE plays a crucial role in Goze’s camp, and three others like it in the region, by ensuring there are clean water supplies, toilets and showers, and that waste facilities are available.

With funding from the foreign affairs departments of Germany, Luxembourg and Canada, CARE has been able to support more than 45,000 people in these formal camps. CARE also supports 7,000 people living in nearby villages, stretched by the arrival of hundreds of displaced families.

Even before the Mosul offensive began, there were 3.3 million displaced people in Iraq, unable to return to their homes because of conflict. Across the country there are 10 million people in need of humanitarian aid. And those figures will increase as fighting around Mosul intensifies.

Goze escaped with her husband and six children, walking at night to avoid capture.

“We were so scared,” she said.

“During the day we had to hide and keep quiet so no one would find us.”

After seven days, with nothing but the clothes on their back and battling the freezing winter cold, they reached Zakho, a city in northern Iraq near the Turkish border.

It was from there the family managed to find refuge at the newly erected Berseve 1 camp.

Goze was lucky to escape but her survival is also a burden.

“Many of our relatives didn’t escape. At first, we were still able to speak to them on the phone. But for a year and half now, phone lines have been cut and we haven’t heard anything.”

Four of her relatives recently arrived at the camp, after being held hostage for a year by the armed attackers.

“The children,” she says breaking into tears, “they were the same age as my own. These children are like my own, it hurts to know what they’ve been through.”

For two years, Goze’s family have shared two four-by-four metre tents. Inside are foam mattresses and little else.

The tents are perched atop a concrete slab, which CARE recently constructed.

Of the many services CARE provides, which extends to supply of hygiene items (sanitary pads, soap, toothpaste, etc) and household goods (washing powder, towels, oil, etc), Goze says the concrete floor is one of the most important.

On the day I visit, the sun is hot with the temperature pushing 30 degrees. It is mild compared to a couple of months ago when it would regularly reach over 45 degrees.

In just a couple of months, the temperature will drop below zero. Rains will come at the same time, and the concrete foundation is the only thing stopping her home from becoming a muddy pit.

All but one of Goze’s children go to school at the camp.

Recently, Goze and her husband made the difficult decision to pull their 16-year-old son Khalid* out of school.

“My husband has to earn an income to support our family of eight. And when he’s sick, we have nothing. So my boy has to help him.”

Despite the family’s predicament, Goze tries to keep positive about her family’s future.

“We are not held hostage, everything is ok for us. Whether we live here or somewhere else, it doesn’t matter. The main thing is we are safe.”

She still hopes that one day she will be able to return to her small mudbrick home in Sinjar.

“The house was very old. We did not have much but we were thankful. It was safe [before the militants arrived].”

When asked about what struggles she faces at the camp, Goze laughs:

“The first thing: we wish the laundry was closer to our tent. I have to walk past 17 tents to do the washing!”

*Names have been changed to protect the family's anonymity. 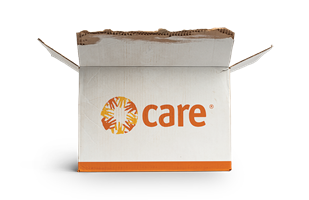 You can help families like Goze's who have been forced from their homes in Iraq. Send a CARE Package with basic essentials such as blankets, sleeping mats, kitchen supplies, water storage containers and mosquito nets.