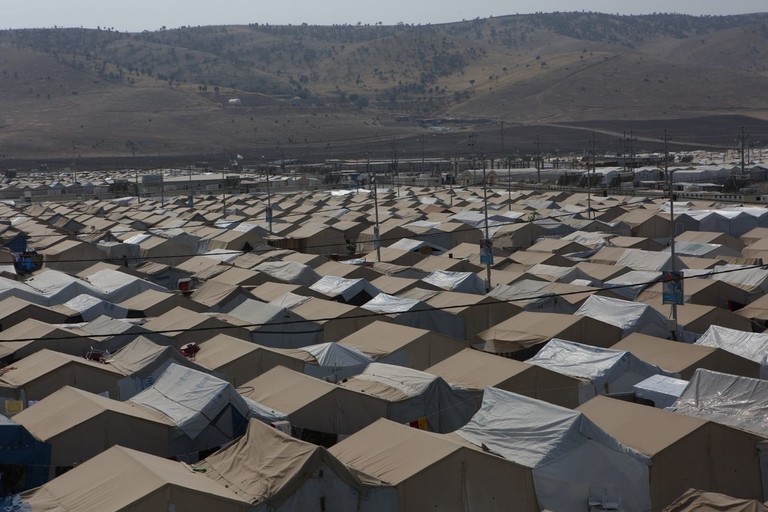 (WASHINGTON, D.C.) On Holocaust Remembrance Day, President Trump signed an executive order which curbs a life-saving program that provides protection to the world’s most vulnerable refugees, who are predominantly women and children fleeing conflict and persecution.

Since 1975, the U.S. Refugee Admissions Program has been vital to achieving humanitarian goals, while promoting economic interests, and enhancing national security. With more than 65 million people on the run-the highest number in history- this is not the time to back down from this commitment to refugees.

“Not only will this order put significant numbers of individuals fleeing conflict and persecution at immediate risk, but also it will harm our relations around the world. Frontline states, such as Jordan, struggle to keep their borders open to millions of people just trying to survive. Should the U.S. not live up to our humanitarian commitments, we could foreseeably compromise relationships vital to our national interests,” said Michelle Nunn, president and CEO of CARE USA.

The Trump Executive Order will reduce the overall number of refugees who can enter the United States this year from 110,000 to 50,000. It will also halt the Special Immigrant Visa program established to help Iraqis who risked their lives to assist the United States in Iraq after the September 11th attacks. The delicately balanced diplomatic effort to keep borders open to those fleeing violence; to protect those who risked their lives in support of our overseas efforts; and to support countries hosting refugees is highly dependent on an American commitment to humanitarian leadership.

This order also suspends the U.S. refugee resettlement program for 90 days, immediately gutting the ability of the State Department and Department of Homeland Security to effectively screen and admit refugees. It further imposes discriminatory standards in the U.S. refugee admission process, banning the admission of Syrian refugees, and effectively restricting Muslim applicants.

“Given the level of displacement in the world today, it is more important than ever that the U.S. continue to resettle the most vulnerable individuals based solely on need, blind to race, religion, or nationality,” said Nunn. “Governments, NGOs and the private sector must work in tandem to find solutions that allow displaced individuals to lead productive and dignified lives outside of conflict.”

In addition, CARE is concerned about the discussion of safe-zones in the context of this Executive Order. Safe zones remain a false moniker as they cannot guarantee the safety of those inside, nor are they a substitute for resettlement.

“We urge the United States to adopt policies that prioritize the safety and security of individuals in accordance with international law and humanitarian principles and condemn actions that may result in forced return,” said Nunn.

To arrange an interview with a CARE spokesperson, contact: