Living in peace: A Syrian father’s wish for the New Year 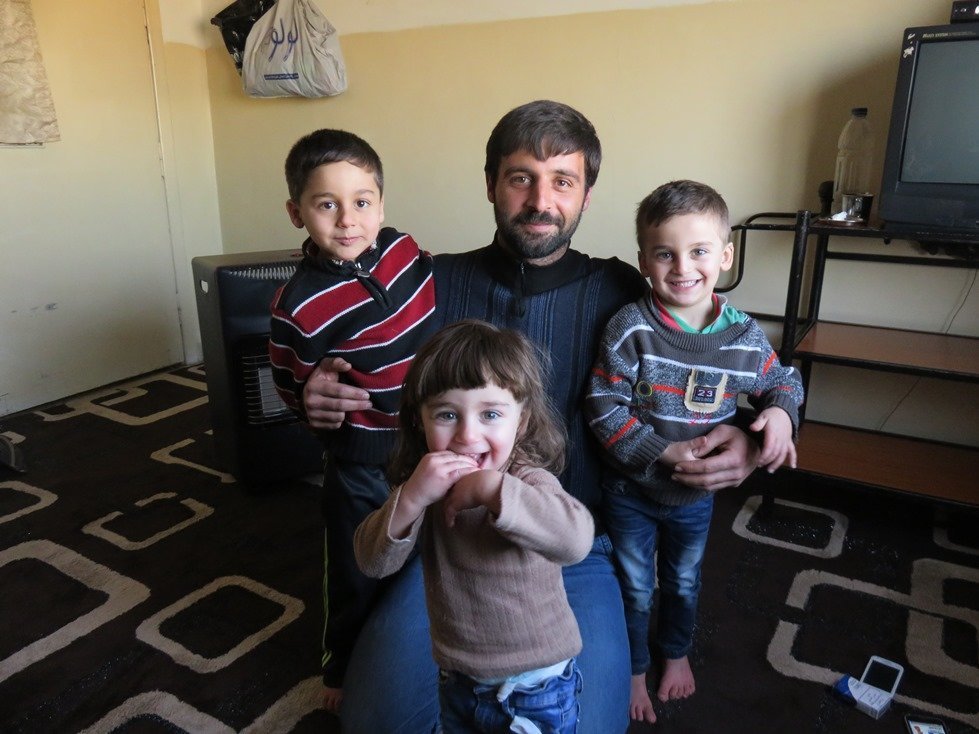 Adulaleem’s three children hug him and he smiles. Despite having lost everything in Syria, he continues to hope and dream for his children.

“The few past years have been very difficult, but the most important thing is that my children are safe. I do not want them to be hurt or to hurt anyone,” says Adulaleem, watching his little tribe play as his six-month-old baby sleeps calmly in her mother's arms.

In order to protect his family Adulaleem decided to flee Syria in 2013.

“We traveled for two days before crossing the Jordanian border. The trip was difficult, especially for my wife who was five-months pregnant. Yet we could not stay. We had to make sure that our son and our unborn baby would be safe.”

Adulaleem appreciates the help he receives. He tries to remain positive despite very difficult living conditions in Amman.

“Last year we lived in a basement but the humidity aggravated my youngest son’s asthma. It was for him that we found this apartment. We all live here in this single room. It's much better even if there are a lot of improvements to make. In the winter, we all sit down against the old heater which we were able to repair,” says Adulaleem, looking around. “Anyway, we have nowhere else to go.”

The New Year marks the continuation of the family’s exile. Adulaleem hopes that it will be better for him and his family.

“I would like to regain my dignity and be able to take care of my family by myself. I no longer want to have to depend on others. I do not want to have so much debt. I still owe money to my neighbours. Today, all I want is a stable income.”

Adulaleem often finds it difficult to pay rent and to support his family. CARE has helped him by providing cash assistance. His family also receives monthly vouchers from the World Food Programme. This is enough to feed them, but not enough to have healthy and varied meals.

“We all like to eat a good meal,” Adulaleem laughs. “But it depends on our financial situation. We can buy rice, pasta and sometimes vegetables but most of the time we do not have enough money to buy meat.”

When six year-old Mohammed started losing his hair, his parents took him to the doctor for tests. The result: lack of protein intake caused a significant iron deficiency that impacts Mohammed's health.

“We depend on what I earn. In Homs, in Syria, I owned a furniture store. Here I am ready to do any work. Most of the time, I carry heavy things for stores, like bags of flour for bakeries. It is our only source of income. At the moment, I do not have enough money to buy meat or medicines for my family,” explains Adulaleem, who at 39 years old, suffers from back pain due to the physical efforts of these small jobs.

As the world ushers in a new year with renewed hope, Adulaleem has one wish:

“I pray that the situation in Jordan will remain stable. We thank the country that welcomed us. Where would all the refugees go if we were to leave Jordan? My most cherished wish is for peace to return to Syria and for the rest of the world to be safe. Living in peace is the most important thing.”

You can help families like Adulaleem’s by supporting CARE’s work to restore dignity to Syrian refugees.