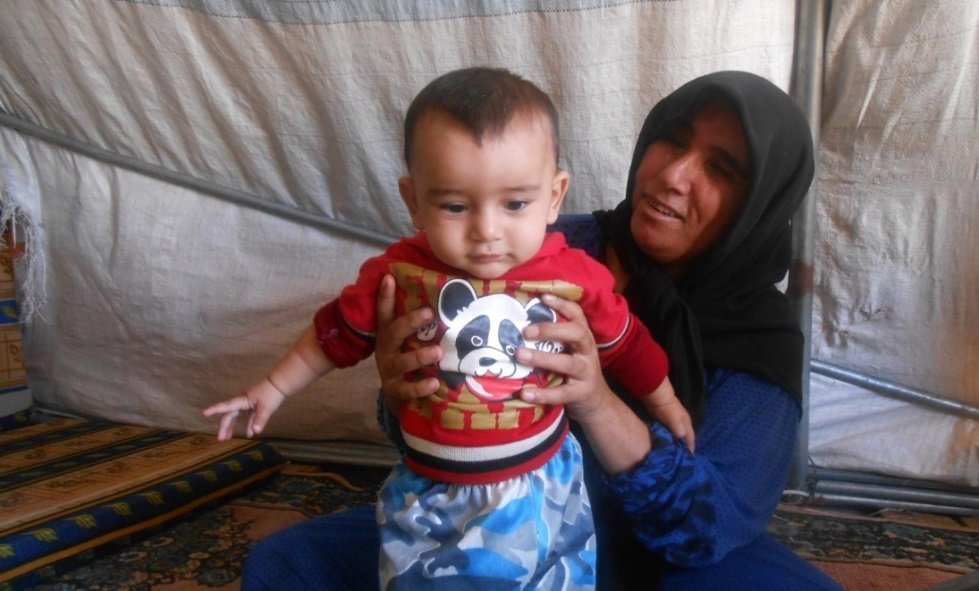 The intense fighting around Aleppo has killed scores of Syrians and displaced hundreds of thousands, worsening the already dire conditions faced by internally displaced persons (IDP) in Aleppo.

“The life in the camp is very hard and dangerous,” one Syrian mother, Souad, told CARE partner field staff when they delivered assistance to a displacement site in the northern Aleppo countryside.

According to the 2017 United Nations humanitarian needs assessment, 6.3 million Syrians are internally displaced, with over one million of them currently living in IDP sites across Syria, the majority being women and children.

Three years ago, 45 year-old Souad fled her village in eastern Aleppo to Manbij, near the Syrian-Turkish border, after militant forces took control of her village. When her husband and son were killed in an airstrike, she had little choice but to dedicate herself to raising her two remaining sons and daughter alone.

“Before the conflict, we lived in dignity,” Souad says, recalling her family’s home life, now a distant memory. “We had farmlands with olive trees, and I worked as a tailor, earning a lot of money.”

In Syria, women and children face increasing risks of violence and exploitation associated with forced and repeated displacement. They also face extreme poverty. Souad explains that her family has been living without any resources and with no access to basic services. They have not received any assistance for over three months.

Through a project funded by CARE, 2,155 emergency food baskets have been delivered to Syrians displaced by the ongoing violence in Aleppo. Each food basket contains essential food supplieslike rice, sugar, oil and pasta. The distribution has reached 1,080 households (approximately 6,480 individuals) currently living in the northern Aleppo countryside.

“The basket has important items that we are in need of,” Souad adds, as she collects the food stuffs at the distribution.

As front lines shift, many IDPs must move multiple times in search of safety. This has a drastic impact on a family’s financial resources, forcing them into poorer accommodations and more crowded shelters.

“Despite the camp conditions and the need for more support, we feel safe here,” Souad explains. “We hope the war will end, that we can return to our home, and meet with our relatives soon.”