Women in eastern Niger turn economic opportunity into personal and community transformation –revealing to a new generation what it means to dream.

In 1991, CARE launched a transformative program that would change the world. It harnessed the ancient practice of group savings in an innovative concept called Village Savings and Loan Associations, or as those first groups in eastern Niger called it, Mata Masu Dubara (“Women on the Move”). A quarter-century later, it has expanded to include more than 200,000 groups and 5 million members across Africa and around the world, powering personal and community transformation through financial independence. Here is the story of how one of those very first VSLA groups has lifted up three generations of a family in Kagadama, Niger.

Twelve-year-old Nana Hadiza wakes each morning with her five brothers and sisters, who sleep like puzzle pieces on a sky-blue straw mat inside an earthen room. Nana prays. Then she sweeps leaves and twigs from the rock-hard dirt ground outside her door and tends to her family’s goats. Manual labor occupies a broad swath of rural village life. And in Kagadama, it falls disproportionately into calloused hands of girls like Nana whose childhoods are short. In the Maradi region, where Nana lives, nine out of 10 girls wed before they’re 18.

To round out her morning routine, Nana makes her siblings breakfast – most often ground millet whisked in goat’s milk to form a warm porridge, which they share under a shady neem tree in their family’s courtyard.

But it’s the next part of her day that reveals a profound change in Kagadama: Nana goes to school. She’s able to walk out her tin front door, heading to class, because of a small door her grandmother, Fatchima Aboubaca, opened over 25 years ago. It was the door on a lockbox that would help transform life in Kagadama.

WHEN I WAS A GIRL

Aboubaca lives just steps away from Nana, beyond a mud-brick fence and a small herd of goats munching on hay. “When I was a girl, I wished the chores would just stop,” Aboubaca says, recalling from her own childhood the endless pounding of beans and millet. “We would take the millet powder and make a drink for our parents called fura,” she says, leaning into a sliver of shade on what is fast becoming a 100-degree day. “I’d fetch water in the bush and firewood for cooking. We’d collect guruba, which we’d also pound to make sweet food.” Guruba is a nut about the size of an apple.

Her life was limited to the daily chores necessary to survive it. And she took on a lot more when she became a child bride at age 15. “People would talk about marriage, and I would run away,” she says. “But then I stopped running.”

Aboubaca remembers Kagadama two or three decades ago as stunted, throttled by poverty and discontent. “Everyone used to fight all the time,” she says. “We all had a black heart, because there was no money and no food. There was no peace and no happiness.” As she recalls, the people of Kagadama were poor and hungry. They lived in overcrowded straw huts. Most often, children fared the worst.

Laoura Harouna, a neighbour, remembers ambulances racing to the village almost every day. “The children were always sick, always malnourished,” Harouna says. “And when the ambulances left, they didn’t take just one child. They took 10. We were always back and forth to the hospital, about 25 kilometers away. No time for social life or to make a living. And the village suffered.”

In time, however, change would take root in Kagadama. It started with Aboubaca’s modest metal lockbox, equipped with three padlocks and three keys. Each key had a separate keeper — security measures to protect the life-changing, even lifesaving, contents inside. 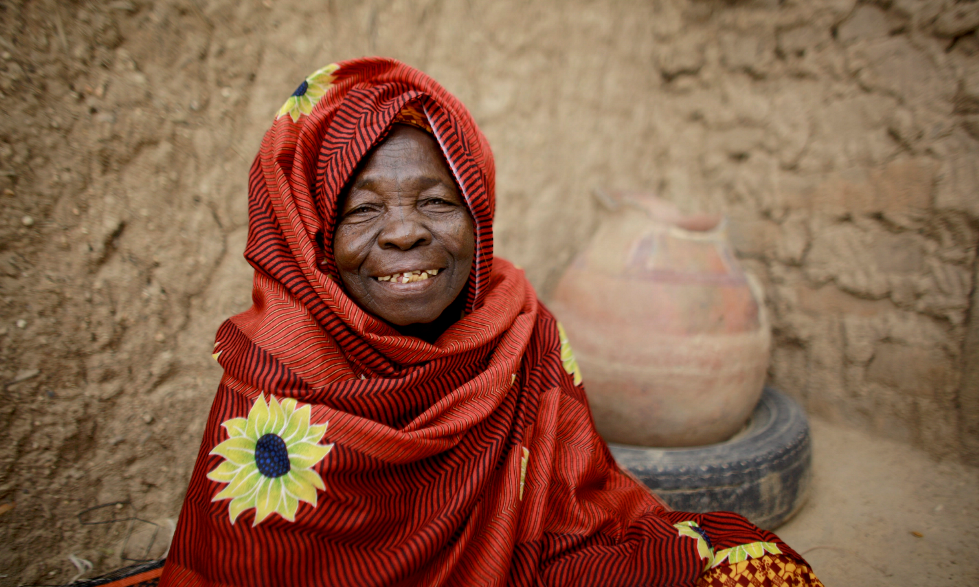 IT’S NOT DOING ANY HARM

In 1991, Moira Eknes, a Norwegian program manager for CARE, arrived in Niger’s Maradi region to implement a tree-planting effort in six villages, including Kagadama. As she talked with women like Aboubaca, she quickly learned that, since they lacked land ownership rights, they weren’t at all interested in planting trees. They were interested in making ends meet for their families. They needed ways to generate income.

Life in a place like Niger can be particularly hard for girls and women. Women literally carry the bulk of their household’s workload, fetching water, cooking, pounding millet — which means hoisting a 4-foot, 12-pound pestle, then driving it repeatedly into an 18-inch mortar. There’s a dull thump as the pestle finds the millet in the bottom, over and over, like drumming a folded towel.

The women Eknes met worked hard, but their earnings were meager, if anything at all. They turned to other means, describing for her a kind of money “merry-go-round,” traditional African tontines, in which a group of women agree to save a few pennies a week. At the end of the month, one group member takes the collective savings, which she uses to buy food for her family or to purchase items like peanut oil to sell. And so it goes until each member has a turn. That model, however, was risky, Eknes says, “because as a member of the tontine, you have no guarantee the group will still be there by the time your turn comes around.”

The challenge inspired an innovation. Eknes recalls: “We thought, ‘What if we made the fund last longer? What if we built it up so that multiple members could take loans along the way, then pay them back with interest?’” At the time, microcredit already was a popular tool among nonprofit aid organizations, but the typical model relied on credit from outside lenders who also collected the interest when borrowers repaid their loans. Eknes’ model differed in that it derived capital from savings, from the women themselves who became their own investors, their own bankers. The interest they paid on their loans came back to them as profit, which fueled the savings-based economic engine that was named CARE’s Village Savings and Loan Associations, or VSLA. In Niger, it was and is called Mata Masu Dubara, or “Women on the Move.”

A quarter-century later, more than 200,000 CARE VSLAs, having mobilized more than 5 million members, operate throughout Africa and beyond, depositing, saving and lending money from lockboxes, meeting weekly under shade trees in the most remote parts of the world. Other organizations have replicated the model, marshaling another 5 million people in similar groups across the globe. In all, VSLA groups make an estimated 30 million transactions a month – or 350 million each year.

SOWING THE SEEDS OF CHANGE

Twenty-five years ago in Kagadama, however, Aboubaca was counting much smaller numbers, like the 4 cents she and her 34 fellow Women on the Move members would save and deposit each week in their gray metal lockbox – which is still used today. She never attended school, but says she understood the opportunities group savings could unlock for her. “We welcomed Women on the Move with both hands,” she says. “We had high hopes and thought we’d give it a try to see what happened.” They soon increased their individual weekly deposits to 16 cents.

Aboubaca used her first loan, about $1, to buy peanut oil, which she sold for a profit. With that loan repaid after a couple of weeks, she borrowed more to make and sell homemade remedies, fashioned from moringa leaves and other plants that cured ailments like digestion. Her most popular product? An aphrodisiac that she says, with a wink, quickly grew her male customer base, as men from nearby villages sought out her recipe, which, to this day, she uses and keeps secret. Her daily investment of $3 yields $5 in return. 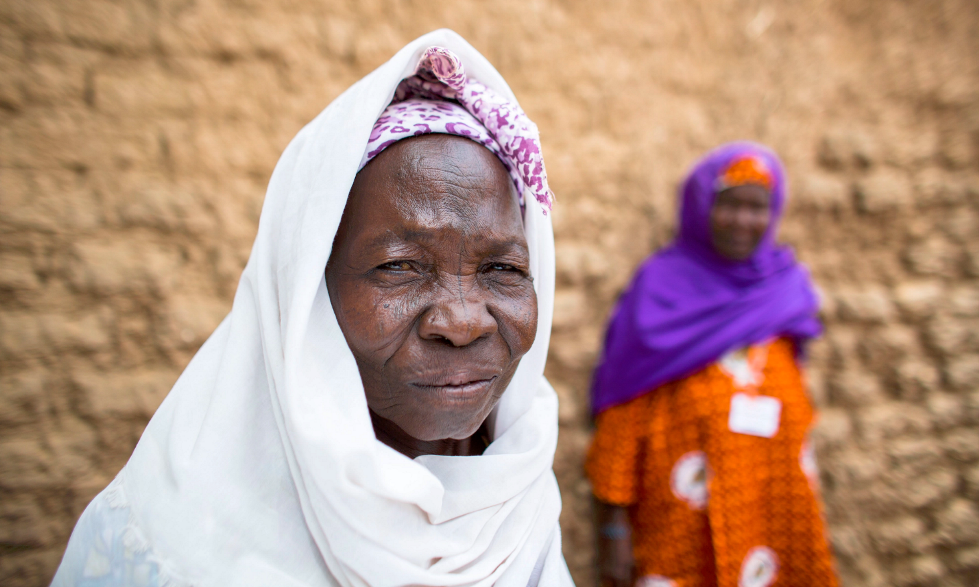 With the added income from her businesses, the trajectory of her family’s life changed. She was able to feed her children more nutritious food, improving their overall health. And as they got older, she was able to pay for their weddings as they started families of their own. With the sale of livestock Aboubaca had accumulated, she was able to make a pilgrimage to Mecca 14 years ago, which “fulfilled me as a Muslim,” she says. Back home, her savings allowed her to build a decent home – semi-concrete with a metal roof – leaving behind her meager straw hut, which still sits a few feet from her door but today shelters goats instead of people.

Folks in Kagadama, particularly the women, were watching as this family was transformed. But they were not watching passively. They were joining and forming Women on the Move groups of their own, coming together as they never had before, saving, borrowing, earning and supporting one another. They were becoming entrepreneurs, selling rice cakes and bean cakes, groundnuts and home remedies. They were farming plots they owned and had purchased, and introducing to Kagadama new foods like carrots and cabbage. “We had never seen those things before,” Aboubaca says, “but our group bought land and started growing them. The kids loved it so they ate it, and that made them healthier.”

THE POWER TO TRANSFORM

Aboubaca’s daughter, Haoua, grew up attending Women on the Move group meetings with her mother, but some of the benefits didn’t quite materialize in time for her to unlock the same doors Nana has opened. Haoua married at 15, for example, like her mother. Also like her mother, she never attended school, because no one ever registered her. Education simply wasn’t valued in Kagadama when she was a child.

But Kagadama — and Haoua — looks differently upon education today, and Haoua credits Women on the Move for that evolution.

Although she still laments missing out on an education, her eyes have been opened in other ways, including a conviction that education is critical for the future of her own children. “I want them to go to school so they can become anything they want, because I didn’t have that chance.” she says. Her involvement with her CARE savings group yields a consistent income, too, and that helps cover their school expenses. She makes doughnuts, which she sells for 4 cents each, earning a daily profit of about $3. Improved finances are only one aspect, though, of her village’s transformation. “People are more enlightened today,” she says. “They know how to earn money and how to invest it. My generation is wiser than my mother’s, and my kids’ will be stronger than mine. It will only continue.”

Nowhere does the light of community transformation shine brighter than in the eyes and aspirations of 12-year-old Nana Hadiza. It illuminates a broad path, clear and unending, that will lead her beyond the limitations her grandmother encountered. She has set her sights on becoming a teacher.

Perhaps equally important to the dream itself, however, is her capacity to dream at all. And she wants as much for everyone in Kagadama. “My hope is that everyone in my village grows and develops together,” she says, the thump of millet-pounding rising above a nearby mud-brick wall. “Seeing them happy makes me happy.”

Learn more about how CARE is empowering women and girls, and men and boys, to lift themselves out of poverty through savings groups, business training, and more.
Share
Tweet
Share
Email