Syria crisis: “Tell the world to love each other”

Brothers, Taleb and Sajed, remember the day they fled their country. It was three years ago, when their parents hustled them with two other siblings onto the back of a truck, crowded with other families fleeing the war.

“We had to move quickly,” their father Mohammad says. “We had no choice.”

Armed militias had entered the village and were taking men’s identification cards. They did not know what would happen next.

The family of six had already spent two years moving from place to place inside Syria.

“In one two month period, we moved neighbourhoods every other day. But each time, the conflict spread and we had to move, again.”

Despite the almost five million Syrians who are today refugees, many of them, like this family, resisted leaving the country.

“We were waiting for the situation to calm down, but it didn’t,” Mohammad sighs.

It was a cold January day when they climbed into the back of the truck to make their escape south towards the Jordanian border. Lebanon was closer, but that border was already closed.

“It was such a long road – difficult and uncomfortable,” Sajed recalls. “I don’t even remember when we arrived in Jordan.”

The youngest brother, Fajr, however, does. Looking up at his father, he speaks softly, “I thought Syria was more beautiful…”

Hind, 16, is the eldest child and theonly daughter. She recalls her life before the war.

“I had so many friends in those days,” she smiles. “We would visit with each other, go for walks, chat.”

Hind doesn’t see those friends anymore, and she isn’t sure what her future holds. She covers her eyes, hiding tears. Composing herself, she says, “I hope that each family can return to their home, that no one has to flee their country. I hope that we don’t live with so many problems, and that people can live in safety.”

But today, as the war rages, 6.3 million Syrians are displaced, and another five million have been made refugees. For many of them, their greatest challenge is earning an income, and accessing sustainable livelihoods. In Jordan, CARE supports refugees and vulnerable members of the host community with vocational training in addition to emergency cash assistance.

“In Syria, I drove a pickup truck for construction companies. Here, I can’t find work. My only experience is as a driver, and no one wants someone old like me,” explains Mohammad who is only 42, but the war has had an impact on him.

The children, too, seem old beyond their years. They are serious, thoughtful.

Sajed, 11, says he hopes to earn a doctorate in geology one day.

“I’d like to see more deeply into the earth. I’d like to make new discoveries. I’m curious about how to extract gold from the ground. I’m interested in dinosaur fossils, too.”

Taleb, 14, the oldest brother, wants to pursue a career in journalism, while the youngest, Fajr, 10, wishes to be a doctor. But as long as they are refugees in Jordan, these dreams will be difficult to pursue. University education is expensive and most families cannot afford the luxury. For this reason, many refugees see a better future through third-country resettlement in Canada, the US, or European countries, as arranged by the UN through the International Organization of Migration (IOM).

But the family has not received a call from IOM. Fatima, the matriarch of the family, says the decision to leave would be difficult.

“Resettlement means a new life, a new culture, a new language. Some people can’t accept so many changes in their life. It was difficult to adjust to our life in Jordan. For example, the children faced challenges in going to schools here, as Syrians.” But like most Syrian parents, decisions are not made on a basis of what is easier, but what will benefit their children more. “For the children and for their future, we must make difficult decisions.” 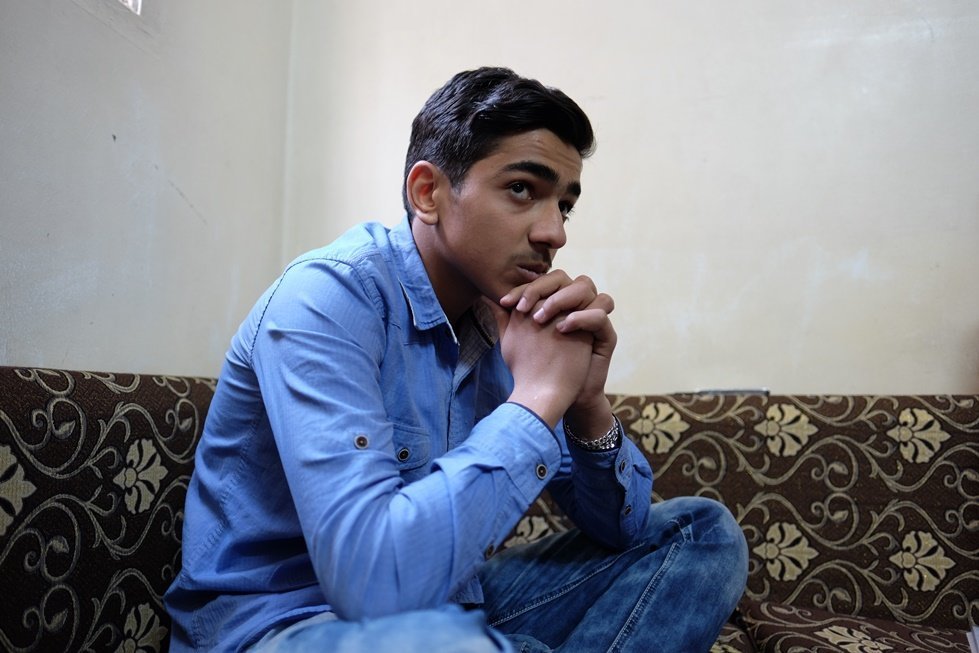 As long as the war continues, resettlement feels like the best option. But home will forever remain their first choice. Fatima wipes her eyes as she recalls the smell of home.

“I miss the smell of the air. We visited a town near the Syrian border one day,” she hesitates, overwhelmed by emotion. She says she was struck with such a strong memory.

“It smelled the same as in my memory – the smell of home.” She lowers her head, dabbing her eyes with a tissue. “I miss this so much – I miss the gatherings we had with family.” The things we take for granted.

From large families, both Mohammad and Fatima’s relatives are scattered. Their large house in Homs is almost destroyed.

“Gone,” Mohammad says. Among their family, some are in Lebanon, some in Turkey, others remain in Syria. His closest relatives are under military siege in rural Homs.

“We lost contact with them one month ago…I have no news from them,” Mohammad says. He hasn’t seen his 90 year old father in six years.

To the international community, Mohammad asks, “Please, help us find a solution. We only wish to see our families together, again, in our homes.”

As participants in the CARE #MakeWordsMatter video, Taleb has only one message he wishes to share. Pausing for a minute, he stares at the floor, his arms resting across his knees, then he looks up. “Tell the world to love each other.”

Learn more about CARE's work to support Syrian refugees and people inside Syria.

Coming together, one meter apart