The journey of a lifetime: Climbing for CARE

Twenty-four hours from now I will be doing my final packing before pushing off on a journey of a lifetime – an eight day climb up Mount Kilimanjaro on behalf of our great organization that is CARE Canada.

This climb is one that I have wanted to do for years, but was always thwarted by some logistical challenge or other. Whether it was work, family, or other positive but ever-present distractions, Kilimanjaro always seemed out of my reach.

This year would be different! When I heard that this would be the last year that the Dream Mountains foundation was undertaking this amazing climb, I decided one evening last fall (admittedly sipping a glass of red wine and chatting over Facebook with the organizer, Shawn Dawson) that I would not miss this opportunity to give back to CARE Canada all it has given me over my 26-year history with the organization.

“I’m in,” I said over Facebook. And you know, once it’s ‘out there in cyberspace’ there is no taking it back – even the next morning when I asked myself “What was I thinking”?

How hard could this be? I’m in reasonable shape, I love to hike, I love to walk endlessly looking for nothing but just for the joy of walking. I’ve lived in countries with high altitudes, have a stomach made of iron, and can sleep virtually anywhere I can reasonably recline. I’ve climbed the mountains of Bolivia with engineers looking for water sources that were always ‘over that last crest’. Yes, of course that was over 20 years ago (as I have been regularly reminded by my friends and family since that fateful night’s decision), but my mental endurance hasn’t changed – and it’s all in the mind right? How hard could this be? 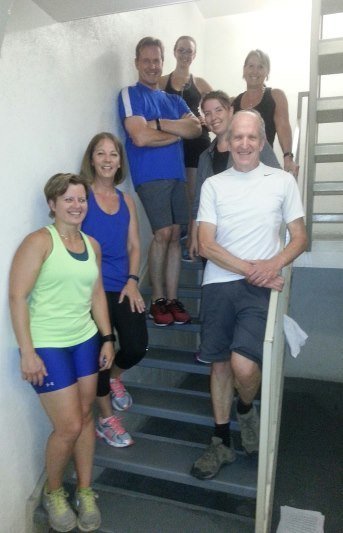 Our training began when Shawn introduced us to ‘the stairs’, which I soon learned would be our primary point of training – not a comfortable gym Stairmaster in an air-conditioned gym with my iPad playing movies, news and music in front of me. In a stairwell. A stairwell in a high-rise hotel in downtown Ottawa. A stairwell of 32 stories. Well, alrighty then. I still had my music and XM Satellite news. This would be fun!

Over the next seven months, I would develop a deep and serious love/hate relationship with those 32 flights of stairs. Our starting point was 32 stories up and down four times/sets (each within 15 minutes). Twice a week. Translation: this would be equivalent to the sadly demised World Trade Centre in NYC, PLUS 18 stories, or 1,792 steps. The first set of 448 steps up and down was easy peazy. Second set, not so easy. Third set, cardiac arrest. Two days afterwards, I could neither climb nor descend the stairs in my house and had to crawl up and down on my hindquarters with my cats looking at me as if I had lost my mind. The lift at the office also saw more action that week than it had for 6 months. It took three more days to get to the point of not grimacing each and every time I moved. What was I thinking?

Miraculously, I recovered and then went back to the stairs, over and over again over the next seven months. Sadly, one of the things that kept me going was the American election and post-election period. There is nothing like listening to CNN and MSNBC political commentary during that October to March period while climbing 1700-4500 steps to keep the blood moving in your system. I was never sure whether my red face was attributed to the climbing or the Trump-related angst.

The final goal was ten sets up and down within 90 minutes. This is equivalent to climbing the CN tower 2 ½ times, without stopping except for a quick drink of lukewarm water and a stretch. I learned over time that counting (looking at the stair numbers) was unadvisable. So I stopped looking. It didn’t take long to get my bearings through my ‘senses’. Floor 10 had a wonderful aroma of patchouli incense, and sometimes a resident on Floor 23 was cooking Italian. The rest was just ‘climbing towards the light’ until the big “F” on the roof door presented itself to all exhausted climbers. No ‘F32’ just ‘F’. The letter ‘F’ really takes on a new meaning after climbing 32 stories over and over again.

After mastering four sets, then six sets, then eight sets, that final two sets seemed unattainable. Then, magically one day, I decided to just ‘jump in’ and do the two final sets. Voila! I felt like I had just peaked on Kilimanjaro which proved that when you set your mind to something, you CAN achieve it – a thought that will hopefully serve me well on summit night.

In addition to the stairs training, these last few months have been a wonderful opportunity to get to know the other climbers. Shawn Dawson and Kristi Johnston, as co-leaders of the climb, have worked tirelessly to ensure we were prepared physically, mentally and socially. I can’t even begin to count the number of personal hours they have invested in group events, bi-weekly Sunday climbs over in the Gatineau Hills and fundraising together so that all seven charities are able to reach their collective goals. A Facebook page was set up so that even individuals located outside of Ottawa can feel a sense of camaraderie with the team.

Getting to know other members of the team has been one of the most enjoyable parts of this adventure. Particularly for those of us working internationally, we often feel isolated from our domestic environment. Dream Mountains has given all of us an opportunity to get to know others that we normally would not have had the pleasure of ever meeting. Even prior to our departure, there is a sense of family which Shawn assures us will be vital as a support network on the climb itself.

The other climbers are a group of wonderfully diverse people from ages 17 to 65 from all walks of life in Canada. The bond that we share together will, no doubt, last a lifetime.

During this final week, we were advised to slow down on the training (yay!) and spend time visiting with family and friends before we go (are they trying to tell us something?).

All of the last-minute fundraising events have been completed and tallies have been done – the group raised over $220K! – it rather feels like Christmas Eve!

One of the things that I am most looking forward to on this journey is the lack of wireless connection. Once out of ‘signal reach’ we will be truly blessed with an ability to simply enjoy each other’s company and think about the purpose of the climb itself. And of course, climb!

Working for an organization that focuses on the empowerment of women and girls, many of whom walk many kilometers each day just for the basics like food, water and cooking fuel, this walk will be very special to me. Having travelled to so many places and seen so many things, I look forward to reflecting upon those journeys and seeing the faces of those I have met with each and every step.

COVID-19: There is no health without food, and there is no food withou...