“One day you are in one place, and then the soldiers come and you have to run to another place. We have been on the run since the war spread to our village last July,” says Mary, a 28 year-old pregnant mother from Central Equatoria in South Sudan.

With both worry and relief in her eyes, Mary sits on the ground of a large tent at Imvepi refugee reception center surrounded by her children and her belongings.

Just five days ago, Mary and her children finally made it safely across the border into Uganda and registered with the government as refugees. Now they wait at the reception center with thousands of other refugees to be assigned a plot of land and receive temporary shelter materials so they can try to start a new life in relative safety.

Mary traveled to Uganda with four other pregnant women from her village, along with their children. They all left their husbands behind in South Sudan, because they would not leave their homes. Mary traveled with her two children, and six other children from her village who were orphans or whose parents stayed back to protect their property.

“We’ve all come with our own children, plus other people’s children, because we want these children to have a chance to live,” says Mary. “I fear how I will continue to care for all these children, but I want to give them the chance of an education.”

The five pregnant women and their children walked through the bush for 10 days to get to the border. It was safer to move at night, because it was easier to avoid running into soldiers. At night, they would walk for a couple of hours, then let the children sleep for awhile. The women would take turns sleeping and keeping watch for the soldiers. They always rested near a water point to drink and eat some of the food they had packed from their gardens back home. 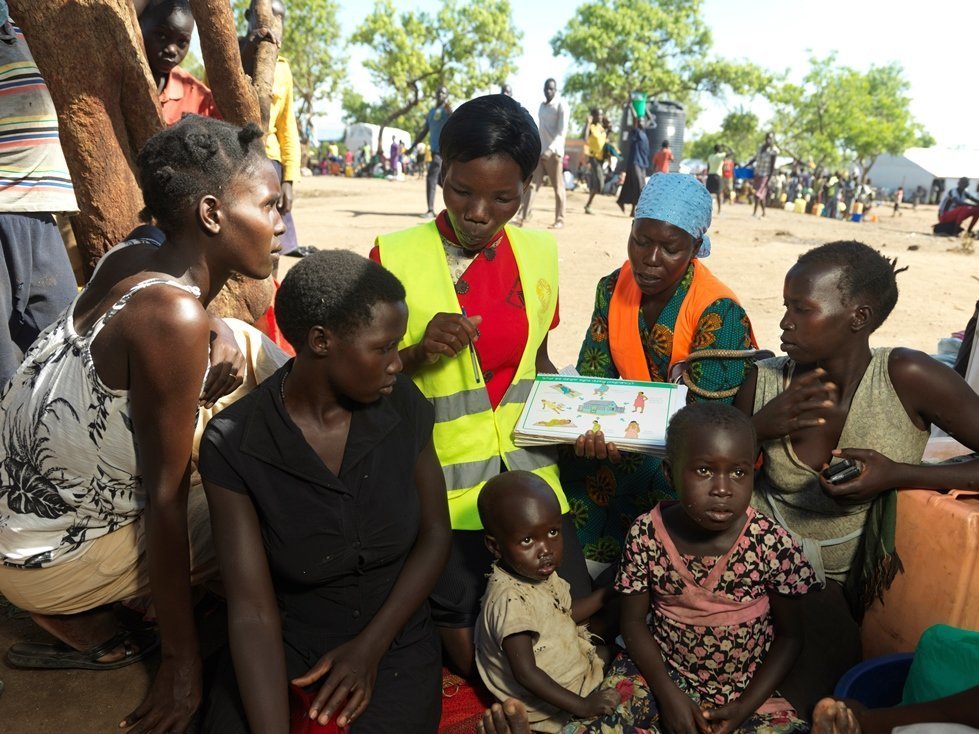 “Every time we stopped to rest, we prayed to God that we would reach Uganda alive,” says Awadi, one of the other pregnant women on the journey. “When we finally arrived in Uganda, we were so relieved. Our bodies were in pain from the travel and we were finally safe.”

“I feel safe now that we’re here, but I worry for the people we left behind,” says Mary. “What pains me the most is that I had to leave my mother behind because she didn’t have the strength to travel.”

When in South Sudan, none of the women had been to see a doctor during their pregnancies. Now, they sit in a circle around Mary, a midwife supported by CARE, who advises them on how to identify complications in their pregnancies, and where to go for antenatal services in the camp. She will take down all of their information to make sure these women get the maternal healthcare they need as soon as possible.

“There are so many pregnant women arriving daily at the border in dire conditions, suffering from malnutrition, malaria or anemia. They need healthcare immediately, and my job is to make sure they get to a clinic,” said Mary the midwife.

The five pregnant women are no exception. When in South Sudan, their only concern was finding food and safety for themselves and their children. Accessing healthcare was not an option, nor a priority compared to their basic survival. Now, that they’re in Uganda that will change.

“I want to stay in Uganda so I can finally access health services and have a healthy baby,” says Margaret after learning from Mary the midwife about the available antenatal services.

One of CARE’s priority interventions in the South Sudanese refugee settlements in Uganda is to ensure access to maternal and reproductive health services to pregnant and breastfeeding mothers.