A Day in the life: A health worker navigates the remote swamps of South Sudan

South Sudan is one of the most logistically challenging countries for health care in the world. Bad roads, ongoing conflict and soaring prices all make the provision of medical services and transporting of supplies extremely difficult. With only 1,147 functioning health facilities across the whole country, over half the population lacks regular access to medical care. CARE runs mobile health centres in some of the most remote communities of northern Unity State, South Sudan. The team is comprised of 8 people who stay in each location for 5 days providing key health services including consultations, nutrition screening, immunizations, ante-natal care and more.

Gabriel Wadar Chieng is a nurse and leads the CARE mobile health team. Spend a day in his life as he gives insight into what it’s like to be a member of this team.

I wake up, brush my teeth and wash my face in preparation for a busy day. Here in the northern part of South Sudan temperatures during the day can soar as high as 38 degrees centigrade, so most people come to access the health services very early in the morning or late afternoon.

By eight-thirty, we’ve had a quick tea and divided up into small groups to start work. We have a couple of staff sitting at the consultation desk, screening and diagnosing patients and referring them either to the dispensary for medication or the in-patient ward if their condition is more serious. We also run nutrition screening and immunization for children under five, as well as a desk for advising pregnant mothers and checking for any pre-natal complications. Many of these people have hardly ever received medical treatment, which is why we try to offer as many different services as possible, so we can cover the major health needs of the whole community.

We usually work up until 1pm, but if there are many people at the clinic, we don’t take a break at all. Some days we can work up till 7pm without break, especially in areas that are really far from the established health facilities. We are only ever in one place for 5 days so we have to make sure we help as many people as possible within that time, and trust me – the needs are great!

By this time, more people come in as temperatures cool a bit. The most common illness we see by far is malaria; we have had cases of people walking 5 hours carrying stretchers with family members on them with severe malaria in order to reach us for treatment. In these cases, if they reach us in time, we put them straight on a quinine drip and can often manage to save their life.

During August and July, the cases of malaria were off the charts since it was the rainy season and mosquito breeding time. This area of the country is marshland, so we have a lot of mosquitos and flooding is also a constant issue.

Usually in a day we see around 200 people. Today the majority are children, many with respiratory tract infections from the poor living conditions, and by 3:00pm we already have seven people in our makeshift bamboo ward on IV drips. Word spreads quickly about our arrival and people walk for many hours to reach the clinic, often arriving tired and dehydrated. 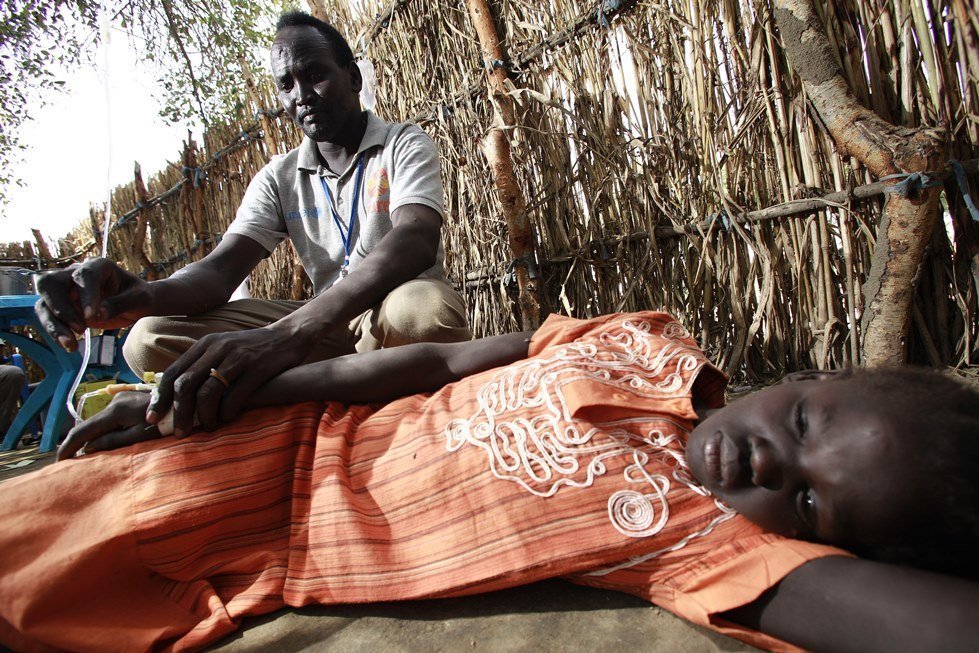 By 8:00pm it is dark and we are usually packed away for the day. Often we eat our dinner as late as 9:00 or 10:00pm, cooking with supplies bought at the beginning of the week in town. We usually stay up quite late to discuss the issues of the day and plan for tomorrow’s clinic. We have a radio that we bring with us and we sit around listening to the news in the evenings. All we hear on the news these days though is bad news – more reports of people being killed in different parts of the country – so it can be very depressing. There is no phone signal in this part of the country so we carry a satellite phone with us in case of any emergencies to communicate back with the base.

Sometimes we can get emergency cases in the middle of the night. Last month we were in a small village called Lingeri when a six-year-old boy was brought to us at 1:00am in critical condition. He was convulsing with a high fever and we found that he had severe malaria. We put him on a quinine drip until the morning and his condition improved greatly. I have a six-year-old son myself so when I was treating him it felt as if it had happened to my own son and I was really desperate to save him.

It’s midnight and I am inside my small tent, ready to get some sleep before starting my routine all over again tomorrow. Since I was young I have wanted to help my people and give something back. In 2013 when conflict broke out, my plans to study medicine in Juba (South Sudan’s capital) were destroyed. Even if they hadn’t been I ruined, I would rather stay here and help my community; at least until the situation gets a bit better and then I can continue to pursue my dream of becoming a doctor.