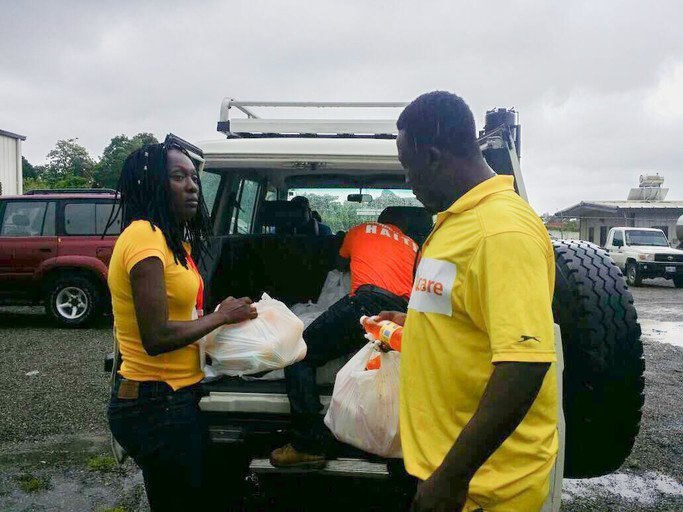 Irma “will continue to bring life-threatening wind, storm surge and rainfall hazards” to the northern coast of Haiti, the U.S. National Hurricane Center said on Thursday, while warning of those same threats in Cuba by Friday and Saturday morning.

CARE, one of the largest humanitarian organizations in Haiti, has teams ready to respond in at least eight of Haiti’s 10 departments, or provinces. In addition to food, CARE has pre-positioned water purification tablets and tarps that can be used for shelter. CARE plans to provide hot meals and drinking water to people in shelters.

“The gigantic waves starting to pound our northern shore give us a hint of what is coming,” said Karl Paul, CARE’s country director in Haiti. “One of our greatest concerns is for the very vulnerable families living in rural, mountainous areas. They live in fragile homes and many are so isolated that they may not have gotten word of Irma’s ferocious strength.”

Urban areas also are at great risk, Paul said. “People are living in very close quarters, lots of houses are very close together. A Category-5 storm can destroy a house, knock down the walls, the roof, everything. Flooding and mudslides are a serious threat, as is the potential for a contaminated water supply.”

Haiti is still recovering from Hurricane Matthew, which devastated the southern part of the country less than a year ago, killing more than 500 people and displacing more than 140,000.

CARE also is working through schools, village savings groups, and mother care groups to get important messages to community members to help them prepare. “We’re telling them get to a safe space, don’t send children to school and make sure your animals are safe too,” Paul said. “CARE will continue to coordinate closely with the Haitian government and other partners in order to prepare and implement an appropriate humanitarian response.”

In Cuba, CARE is preparing to assist local authorities if required, connecting with local partners and contacting suppliers for emergency aid items if needed.

“The north coast of the island will feel the brunt of Hurricane Irma. It’s expected to entail heavy rains and large storm surges, flooding all along the north coast. Those living along the coast are being evacuated, as roads will be washed out when the hurricane strikes,” says Richard Paterson, country representative for CARE in Cuba. “Communities and municipalities, the province of Guantanamo, are still recovering from Hurricane Matthew. Irma, which is Category 5 and stronger than Matthew, is the last thing these people need. We’re worried heavy rains, flooding and high winds will hurt a population already hit hard a year ago.”

CARE has worked in Haiti since 1954, following the devastating Hurricane Hazel that killed more than 1,000 people. After the deadly 2010 earthquake, CARE reached more than 290,000 people with food, clean water, temporary shelter and other vital services. Beyond its emergency response efforts, CARE implements long-term development programs in areas such as education, food and nutrition security, livelihood development and women’s economic empowerment that build resilience among the most vulnerable families. CARE has been active in Cuba for more than two decades with programming focused on food, water and sanitation, disaster risk reduction, humanitarian assistance and gender equality.

CARE has Canadian spokespeople available in Cuba and Haiti. To arrange an interview, contact:

To help us ensure we can respond to emergencies right away, CARE Canada has set up the Emergency Response Fund. Visit care.ca/response to donate.