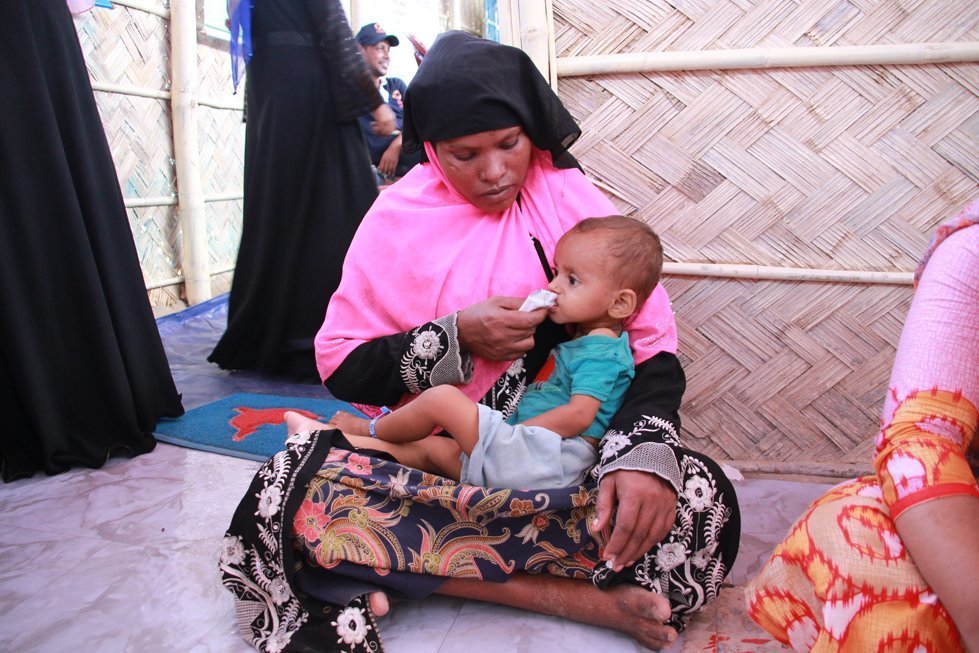 Unisha is tiny. Too small for her age. Her mother, Nursafa, is desperately trying to feed her with plumpy nut, a peanut-based paste for treatment of severe acute malnutrition. The one year-old girl fled from Myanmar to Bangladesh about five days ago, together with her parents and older sister. About seven months ago, armed men had burned down the rice paddy her father once used to cultivate to support his family.

“For the past few months, we did not have enough food and I couldn’t feed my children,” Nursafa says while cradling her baby. “Sometimes my husband would try to secretly go to the market although we were not allowed to leave the camp [in Myanmar]. But he could not go that often because he was scared to get caught,” she adds.

Nursafa is malnourished herself and, as a result, did not produce enough breast milk to feed Unisha.

“Malnutrition during pregnancy and the first two years of a child’s life can have an extremely negative lasting impact on the child’s future health and development,” one of the health workers explains at the malnutrition center Nursafa went to this morning to seek help. It is her first time in the center after a community volunteer told her about it.

They hoped that the situation would get better. But when violence broke out in their village and their house was set on fire, they knew they had to run.

“We couldn’t take anything with us. We just left with our children and our lives,” Nursafa says.

Over 62,800 refugee children in the camps are malnourished. Apart from being desperately hungry, they are surrounded by contaminated water, poor hygiene and the threat of disease.

“I am afraid my child will get diarrhea. I have seen many mothers here whose children are suffering from it,” Nursafa says.

Children with acute malnutrition have very low weight for their height and severe loss of muscle, the most extreme and visible form of undernutrition. They are particularly at risk for contracting further diseases as their immune system is already weakened.

More than half a million refugees from Myanmar sought safety in Bangladesh after violence broke out in Myanmar's northern Rakhine State in August. CARE International is currently helping to identify and treat cases of severe acute malnutrition in children under five. So far, more than 30,000 children were reached in the camps through partners and will be treated with specialized therapeutic food in the coming months.

“I just want my child to not be hungry anymore. I want her to be alive and have a future. But I am not sure if it is already too late for that,” Nursafa says.

Until November 28, your donation will be matched by the Government of Canada.