Myanmar crisis: "I fell on my knees, begging them to spare me" 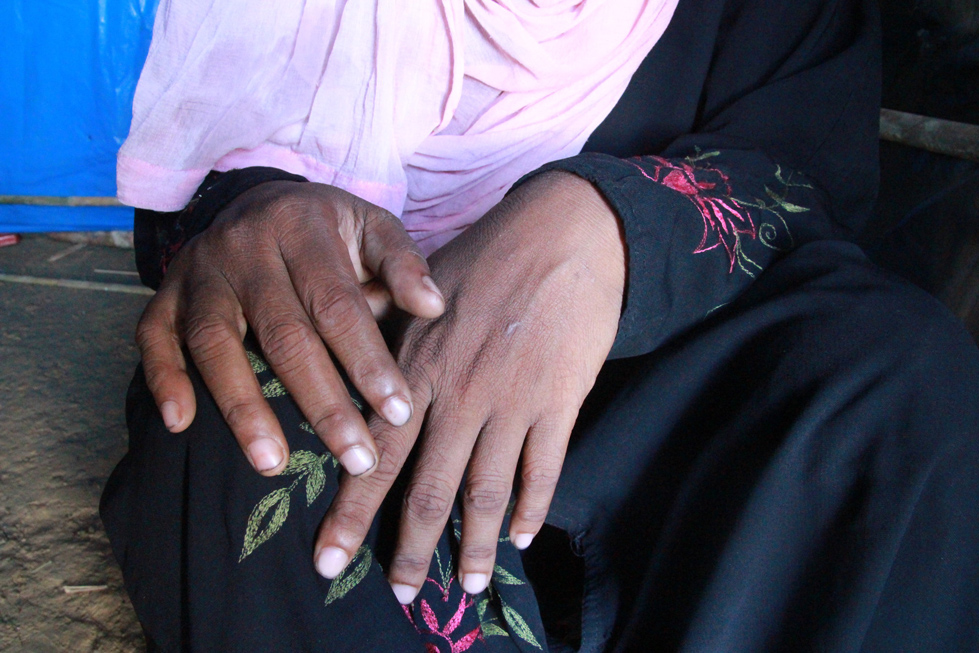 Begum (whose name has been changed to protect her identity) says it’s easy to identify the worst three days of her life. They are her last three days spent in Myanmar. She is one of more than 400,000 Muslim refugees from Myanmar who have suffered or witnessed rape *or was at risk of other forms of gender-based violence before fleeing to Bangladesh. This is her story, as told to CARE’s Jennifer Bose, who sat with the 30-year-old mother of four, on the floor of Begum’s dark tent in a refugee camp. Cradling her 1-year-old son in her arms, Begum wore a pink headscarf and spoke with anger in her voice, turning emotional at each mention of her children.

They kidnapped me. I was sleeping at night when they entered our house, blindfolded me and took me away. I was screaming for help but they threatened to kill me, so I stopped. I don’t know what they did to my husband. I still don’t know if he is alive. I couldn’t tell where they were dragging me, but we walked for about two hours. I heard the voices of other women behind and in front of me as I was being pushed further and further away from my home. They were crying and screaming.

When they removed my blindfold, I saw that there were about 20 to 30 other women around me. About 10 or 15 of them were still children. We were surrounded by the same amount of men, about 20 or 30 of them.

They stripped us naked and started laughing at us. We were beaten whenever we tried to scream or resist. They took their turns — each one of us was dragged into a corner by 10-15 men. They took the young girls first. Some men held them to the ground, while others started raping them. Some of the girls never returned and were choked to death.

When they approached me I fell on my knees, begging them to spare me. They punched me until I was unconscious. When I woke up, my lower body hurt a lot and I could feel I was touched. Not once, not twice, but for three days. The second day, two men came and raped me again. One of them stood on my hands so I couldn’t move while the other one raped me. I thought I was going to die, but when I thought of my children I knew I had to survive. After three days, some of the other women and I noticed that most of the men had fallen asleep.

About 10 of us took the chance and ran. We ran for our lives.

We started recognizing the roads and went to a village nearby, where I happened to have relatives. When they saw my beaten face, they started crying.

In the morning, one of my relatives returned with all four of my children. I was so happy that they were alive.

When my kids saw my condition, my eldest insisted I go to the hospital. When I arrived, I was too ashamed to tell the doctors what happened, so I just took some painkillers and left.

As we walked out of the hospital, some armed men caught my cousin and shot him. He was killed right in front of my eyes. I pretended to be unconscious, and they spared me.

It was at that moment I knew I had to leave, so I went back to the village to grab my kids and saw other women leaving as well. We joined nine other families and started walking toward the mountains, not knowing where the road would lead us. On the way we met hundreds — then thousands — of other families heading that way and followed them.

We walked for eight days, with nothing but the clothes we were wearing. Some villagers occasionally gave us food and water on the way until we finally reached the camp. That was a month and a half ago.

I live here in a tent with one other family I knew from before. I feel safer here and am very grateful for the help that my children and I are receiving. But we still need food. I ran out of rice and I don’t know how I will feed my children.

My greatest wish is to be able to feed my children again. And I want them to be able to go to school so that we can rebuild our lives here in safety.