The toymaker of Azraq refugee camp 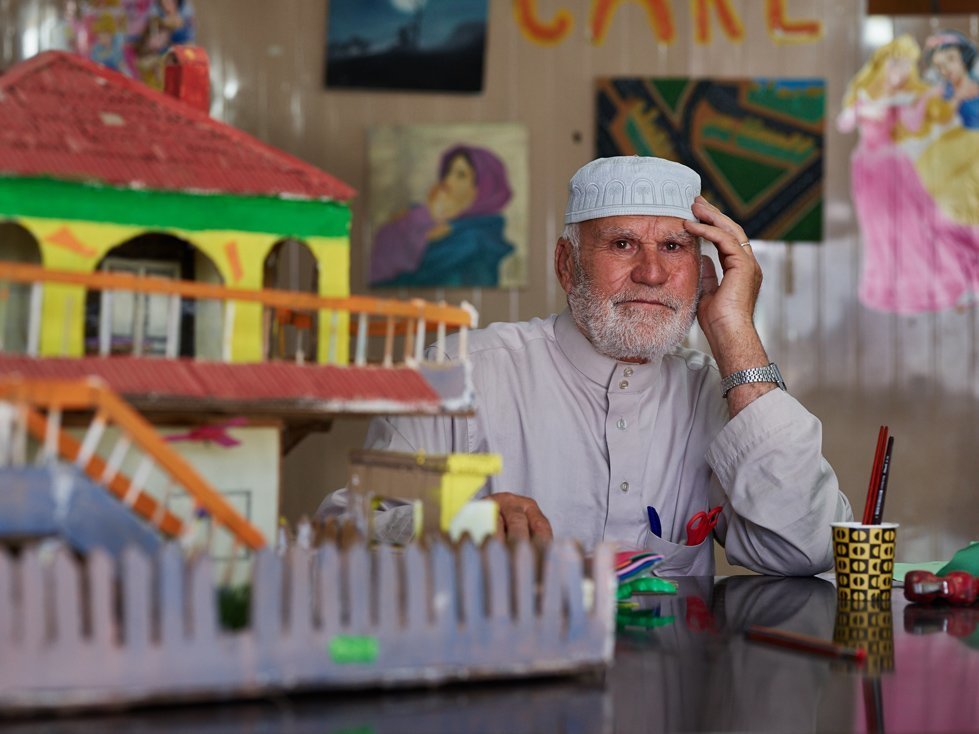 They refer to him simply as “the toymaker.”

At 65 years of age with a thin white beard and a broad smile, Mohammed Asaf certainly looks the part.

He lives at the Azraq refugee camp in eastern Jordan, home to more than 30,000 Syrians forced to flee the violence in their homeland.

For many, living in the camp can feel like an extended feeling of idleness, a long-term cabin fever as you stare at rows of white metal shelters in the middle of a desert.

Mohammed arrived here three years ago and was trying to think of what to do to pass the time.

“I have to do something,” he thought.

Back home in Syria he used to make little toys for his son and nephew and decided he would start making little paper airplanes for some of the children at the camp.

Staff at CARE’s nearby community centre provided him with paint and supplies. Soon, he started thinking more and more about art and different creative handicrafts he could make as his reputation as a toymaker grew.

“The people were so happy, some come just to see what I’m doing,” he says.

Today, Mohammed builds not just planes (which he still is proud of), but dolls, clock towers and little homes. He refers to them as natural toys, recycled from whatever odds and ends he can find or is shared with him.

“I love to think about things I can recycle into toys,” he says.

When asked how many toys he has made since coming to Azraq, he has no idea. He’s made so many toys, “there’s no number,” he says.

Mohammed is from Homs, a city in western Syria, where he lived with his wife on a small farm with a garden he enjoyed working in and a cow that he could use to sell milk or make cheese. He also had a small supermarket delivery business.

Together, they have a large family – seven sons and seven daughters– who now range between the ages of 21 to 42. All of the sons live with them at Azraq along with one daughter. The other women live across the region, with one still inside Syria.

He worries a bomb could land at any time.

Making toys provides Mohammed a way to try not to focus on the worry or life in the camp. Nevertheless, that doesn’t mean Syria is far from his mind.

Many of his toys are inspired by the life he left behind. There are little cows and ducks that remind him of his farm. One of his prized possessions is a model he made of his home from Syria. It’s about the size of a large dollhouse, with a pink roof, yellow and beige walls, surrounded with a simple picket fence.

Someday, it is his wish to return to Syria to live his life again in peace.

Until that happens, he will continue to spread what joy he can as the toymaker of Azraq.