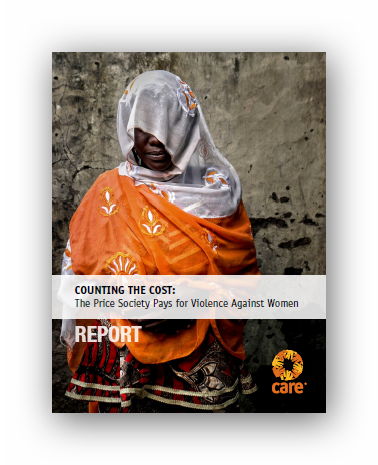 (Geneva) — A new global report launched by the international relief and development organization, CARE International, estimates that violence against women (VAW) costs society upwards of two per cent of global GDP, and states that the problem is serious in low, middle and high income countries alike.

“First and foremost, violence against women is a fundamental human rights violation that demands condemnation and action. While all costs cannot be easily measured, an understanding of the economic costs to society provides additional perspectives as to why governments, donors and the private sector need to come together to address this pandemic,” said Sofia Sprechmann, Program Director for CARE International.

The report, “Counting the Cost: The price society pays for violence against women,” draws on studies from 13 different areas of the world and presents the economic costs of violence against women in relation to national economies. Three of the case studies were conducted by CARE, which looked at intimate partner violence (IPV) in Bangladesh and Zambia and sexual harassment in the workplace in Cambodia.

Survivors bear the highest costs but states bear costs in service delivery to victims while the private sector pays for reduced productivity. Costs and lives are therefore saved when laws and proper investments address preventing violence, education, and thus the implementation of behavioural, legal and regulatory solutions across sectors.

“These figures – both the billions of US dollars that violence costs and the more than one billion women likely to suffer that violence in their lifetime – point to one inescapable conclusion: violence against women has a devastating and lasting impact on all of us and demands that we pledge support and take urgent action” said Jayanthi Kuru-Utumpala, one of the co-authors of the report from Chrysalis, Sri Lanka, an affiliate member of the CARE International network.

“Violence and harassment against women are among the abuses that leave women vulnerable at avoidable cost to them, their families, and whole economies. In the case of workplace protection, more than one-third of the world's countries have no laws prohibiting sexual harassment at work. This is why CARE is encouraging more governments and employers to join the many other governments that have taken a position in support of the adoption of an International Labour Organisation Convention on ending violence and sexual harassment in the world of work as one critical step,” said Milkah Kihunah, Deputy Director of Global Advocacy of CARE USA.

The report recommends actions to prevent and respond to violence against women across the government and private sectors and by donors. These include increased resources, support for women’s and grassroots movements, and strong laws. CARE is also calling on governments, businesses, trade unions and others to support the establishment of an International Labour Organisation (ILO) Convention to end harassment and violence in the world of work. Given the legal gaps in how national laws and current international standards address this issue, a binding ILO Convention would provide a critical guidepost and address the challenges that women and marginalised groups face in accessing the right to work free from violence and harassment.

In summary, some of the studies for the report draw directly from existing national level demographic, health and other surveys. Others have carried out a detailed analysis of previous costing studies to select figures based on the best methodological approaches, or conducted surveys and then extrapolated to the national level. Costs have primarily been measured over a 12-month period, providing the basis for an annual cost estimate. In some studies, the annual cost estimate has been converted to a percentage of GDP. For studies where this has not been done, we have calculated the percentage of GDP based on GDP figures and exchange rates at the time the data was collected for the study, and updated US$ figures to 2017. The studies include direct costs while indirect costs are also included in some of the studies. The Bolivia and Peru studies focus on costs to businesses, while the US study is limited to the costs of rape. For the EU countries, costs were extrapolated from the case of one member state (UK) with a solid costing exercise.

How the three case study countries are using the findings

In Zambia, the costing study is being used to advocate for implementation of the Anti-Gender-Based Violence Act 2011; in Bangladesh, the report’s findings are being used to push for implementation of the Domestic Violence (Prevention & Protection) Act 2010 alongside socioeconomic drives to calculate survivors’ compensation. Cambodia’s STOP project incorporates the findings to implement a package aimed to ending sexual harassment among garment workers, conduct training and establish a workplace harassment policy.