A boy named Care: A story of a family’s appreciation for CARE’s work in South Sudan

Ludia Ajasi is a widow who lives in Odikolong, a small village located in the outskirts of Torit State in South Sudan. She survives by farming a small piece of land behind her house. But for the past few years, her harvest has been bad due to poor rains, which made her struggle to feed her family.

“When my husband died, we had eight children,” says Ludia. “Although it was tough managing such a large family, I was at least happy that he was around to help me. When he died, I had to look after the children alone.”

A few months after the death of her husband, Ludia was – by tradition – expected to marry his late husband’s young brother. She didn’t object much to the idea as she thought having a man around the house would ease the burden of taking care of the children.

“I was very wrong about the man,” she says. “He only came once and that’s when I got pregnant again. But he disappeared never to return.”

With the potential helper gone, Ludia had to look for a way to support her big family. “I couldn’t divorce my new husband because his family would demand back cows they paid for dowry. My family didn’t have the cows as they used them to pay dowry for my brothers,” she explains.

With no source of income, each day became a struggle for survival for Ludia and her family. When she couldn’t find food, the children would go into town and scavenge for leftovers in local restaurants.

“My brother who stayed in Uganda came to visit me last year,” says Ludia. “He was deeply touched by what I was going through. He offered to take seven kids with him and I was left with my youngest daughter, Eli. I didn’t have a choice but to let them go.”

Despite the timely help, Ludia still had Eli to feed. But with no job and a failed harvest, the struggle for food continued. When all hope seemed lost, CARE came knocking at her door.

“I was chosen by the community to participate in a cash for work project by CARE,” says Ludia, who by then, was one month pregnant. “This was a big relief as I didn’t have any source of income.”

The project targeted vulnerable people in locations affected by conflict, particularly households headed by women. It supported the households with cash by engaging people to work on road maintenance and rehabilitation services in their communities.

“This was the first time in years that I have had an income of my own. I knew I had to save some of the money since the project was for three months only,” says Ludia, “So I joined a village savings group supported by CARE.”

Eight months later, the savings would come handy. Ludia was due for delivery and she used part of her savings to hire a motorcycle taxi to take her to the hospital. 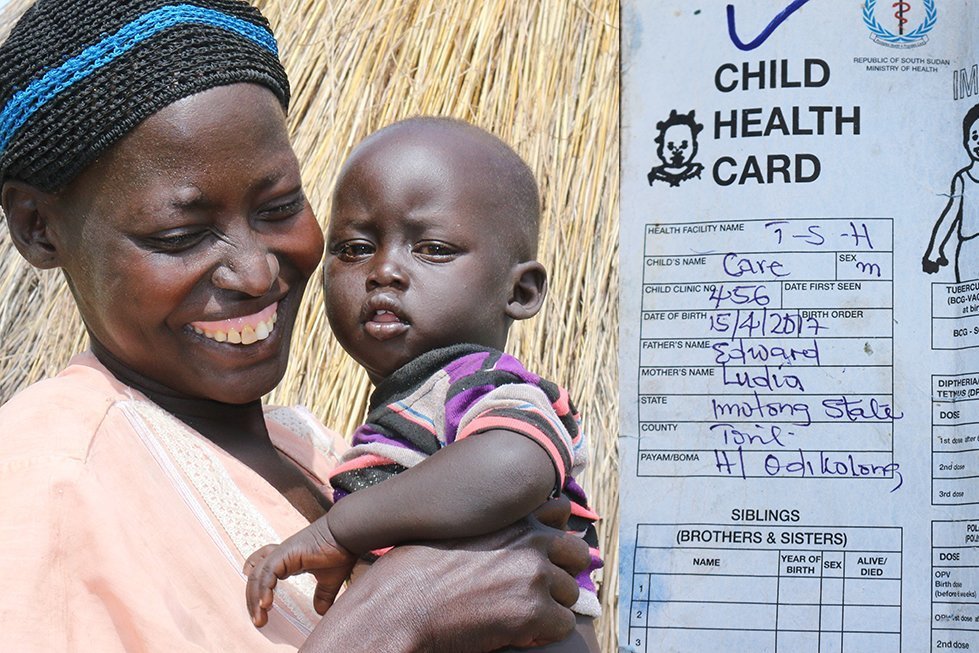 “It’s a quite a distance to the hospital,” she says.  “If I didn’t save some of the money for transport, it would have been difficult for me to walk such a long distance.”

Ludia stayed for a day in the hospital. The next morning, she gave birth to a baby boy.

“When the doctors asked me the name of the child, I told them that he is Care. They looked at me as if they didn’t understand what I said. I told them, yes, his name is Care,” she explains.

For the health staff, it was something new for a parent to name her child after an organization. Normally, the family names a child after their father or a relative.

But for Ludia had her reasons for her choice of name.

“CARE helped me in my greatest time of need. I was struggling so much but they came and gave me a job. No one has ever done that for me. So it was befitting that I name my child after the organization,” she says.

Ludia is now one of the farmers benefitting from CARE’s food security and livelihood project. She is part of a group of farmers who are supported by the organization with things like vegetable and sorghum seeds and farming tools among others.

“So far, the rains have been good. I have already planted my sorghum and I also have a backyard garden where I planted vegetables,” she says. “If we continue to have good rains, I am sure to have a good harvest.”

A good harvest means Ludia will have enough to feed her remaining two children. And if she gets extra, she will sell some of her produce to get money to buy basic necessities. For now, Ludia has set her sights on raising and educating Care so that he can help other people in need.

“I want him to go to school and then get a job with CARE,” says Ludia. “I know that if he works with CARE, he will help other people in need.”

You can help women like Ludia and children like Care! Shop our Gift Catalogue where you can choose from 40+ gifts that help people worldwide lift themselves out of poverty.