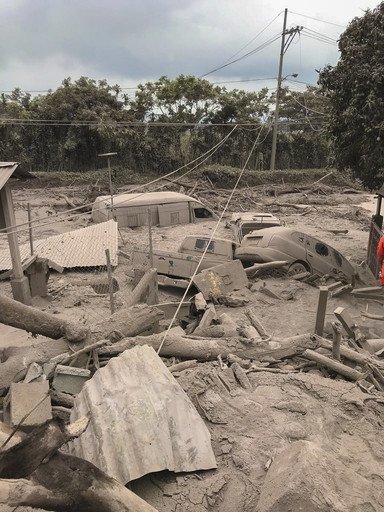 GUATEMALA CITY — Following Fuego volcano’s massive eruption Sunday southwest of Guatemala City, a team from the global humanitarian organization CARE is on the ground in the affected area assessing the impact of the blast and determining how best to meet the needs of affected families and communities.

The Guatemalan government has declared three days of national mourning and a State of Public Calamity in the provinces of Chimaltenango, Escuintla and Sacatepéquez, where the eruption has killed at least 70 people and affected 1.7 million. Authorities, who recently simulated volcano evacuations as a disaster preparedness measure, are conducting search and rescue operations.

“Some communities have been buried under the lava and the ashes,” said Carmen Wilson, who is handling communications for CARE Guatemala’s emergency response team. “People who live around the volcano are used to the constant sounds of small explosions in the volcano, so they were not seriously alarmed by the sounds this time.”

Efforts to locate the missing people are ongoing and difficult, as some areas are hard to reach and others have been closed by the government because active lava flow has rendered them inaccessible. Heavy rains are forecast for the next few days, potentially intensifying the crisis as mud flows and flooding could hinder search and rescue efforts and even reach nearby communities thus far unaffected.

With more than 3,200 people having already fled their homes and communities, the primary needs include shelter and household items such as mattresses and blankets, as many families are sleeping, unprotected, on the ground.

CARE is active in the affected area, where it has supported communities in their coffee and avocado production. Significant crop losses are being reported, and the volcanic blast and risk for new eruptions has forced families working in the agricultural sector to flee their homes and farms.

CARE has personnel on the ground and is in close contact with local leaders, coordinating a response with OCHA (UN Office for the Coordination of Humanitarian Affairs) and Guatemala City-based CONRED (Coordinadora Nacional para la Reducción de Desastres). CARE has activated an eight-member CARE team to assist in the response as needed.

CARE has worked in Guatemala since 1959. We will continue to monitor and assess the impact of the eruption and the needs of those affected, as our team on the ground prepares an appropriate response. CARE is particularly concerned about the well-being of women and girls who often are most vulnerable when disaster strikes, whether natural or man-made.

To arrange an interview with a CARE spokesperson in Guatemala, contact: