More than 1,000 children and parents from Syria and Turkey came together to play at the Kilis Children’s Festival, organized by CARE and the Kilis municipality at the Southern Turkish town’s football stadium.

“We are very happy to work alongside the municipality in Kilis. It’s a fitting city for a celebration of coming together in diversity, because Kilis is home to more Syrian refugees than Turkish nationals,” said Pinar Cetinkaya, CARE Turkey’s Protection Manager.

“The event is about bringing people together, giving children an opportunity to enjoy playing and interacting with one another regardless of their nationalities. It’s also to give their mothers the chance to socialize with each other and have an afternoon out. For many mothers at this time of the year, when the school holidays have begun, caring for children becomes a full-time job, and one that makes it harder for them to leave their homes. So this is a day for the mothers and the children, Turkish and Syrian, to enjoy together.” 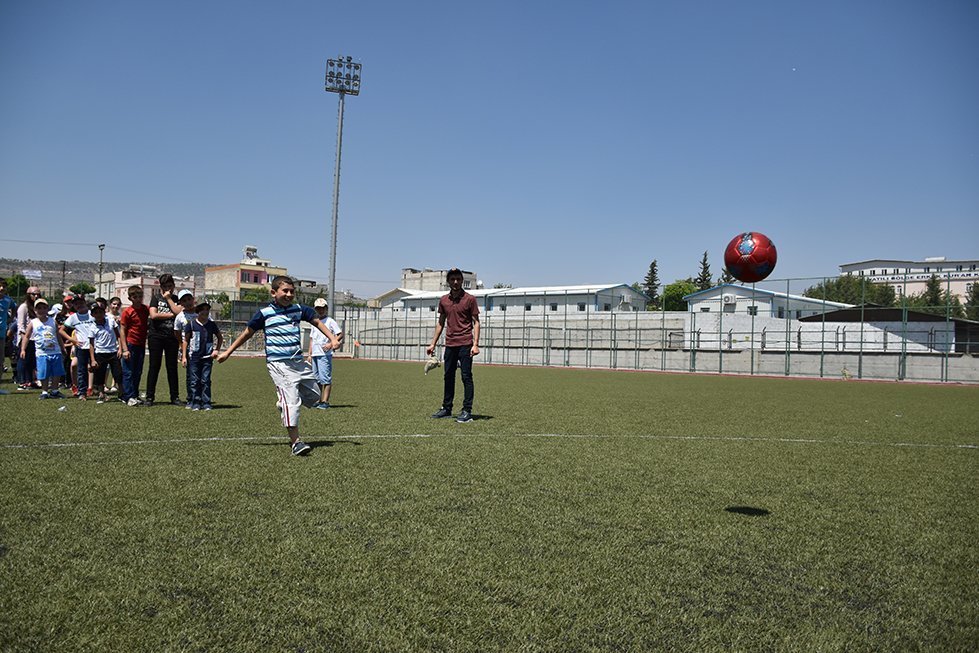 The opportunity to play football in a stadium with full-sized goals proved too tempting to pass up, and boys and girls also took part in several impromptu kick-abouts.

“This afternoon has been great fun,” said 10 year-old Hassan, a refugee from Syria. “I like everything the best! I have been painted as a cat, and I went on the slides and played with everyone. I do have Turkish friends. I go to school with Syrian children and Turkish children and I am learning Turkish. It’s good to live here in Kilis, and to play with my friends.” 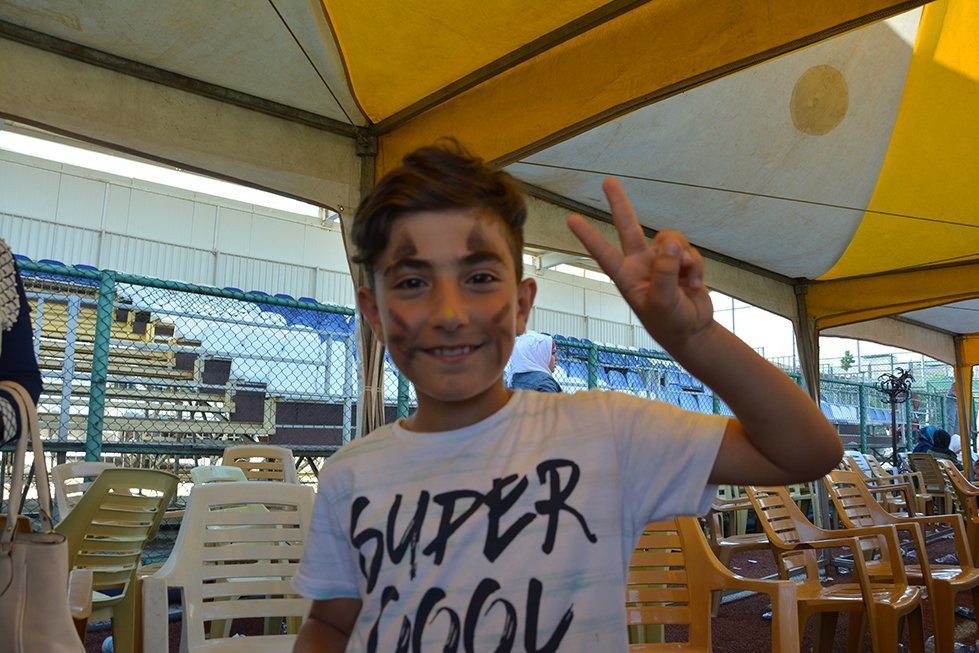 Kilis has become famous around the world, including being nominated for the Nobel Peace Prize in 2016, for its refugee response, as the number of Syrian people who now live there (138,000) is larger than the Turkish population (93,000). In response, the Municipality of Kilis and CARE Turkey are working together to engage, involve and assist all people in need in the region.

The Municipality runs 11 Women and Children’s Centres, where Turkish and Syrian people take courses in arts and crafts, Turkish, and take part in social and vocational activities. CARE operates Information Protection Spaces (IPSes), where Turkish and Syrian people can receive advice and assistance regarding their legal rights. Most of the adults and children who took part in the Festival use CARE and the Municipality’s centres.

Dunya Al Hassen, a 25 year-old mother of four from Aleppo, Syria, has been living in Kilis for four years.

“My children have had a lot of fun here today. But they always have fun when they can play. What is really excellent is that they have been playing here and having fun with Turkish children. This is something I want very much. It’s a really good chance for them to do this, so this event is really good.”

“It’s nice to have a chance to come out and meet with people, to talk. Sometimes you feel like you are trapped in your house and you don’t really see anyone. It can be a little lonely and sad.”

“We are very new here in Kilis, so we don’t really know many people,” says And Asma Nejjar, a 32 year-old mother of three from Aleppo. “The boys do not really have any Turkish friends, though I am friends with some of the women I have met. There are Turkish boys and girls here playing with Syrian children like my sons, so I hope it is a good way for them to meet and maybe to become friends. We all need to have friends.” 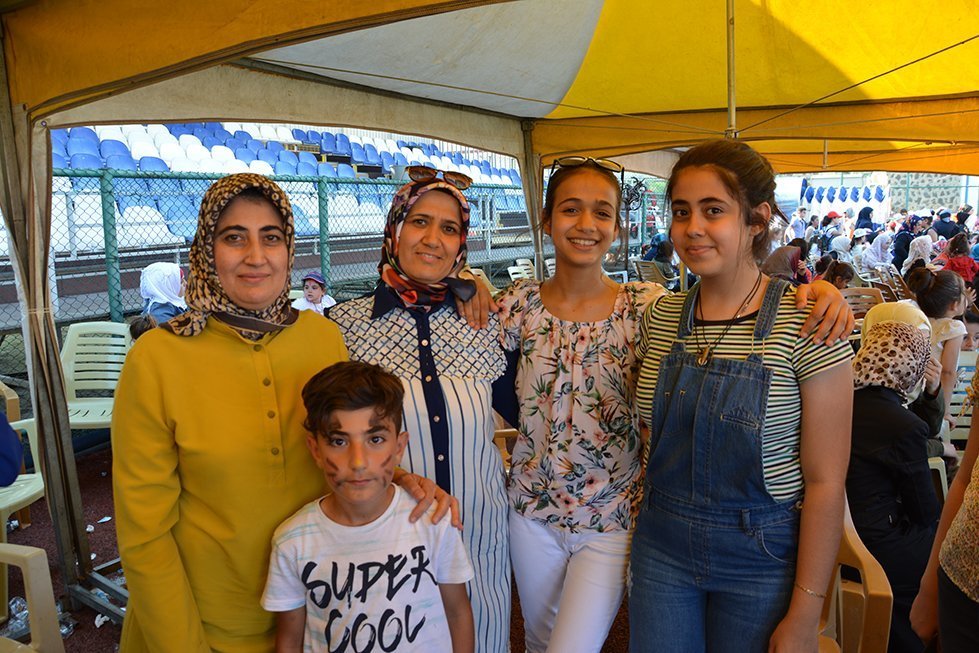 “This is what I want for me and my family. For my sons. This is how to live a life. Not by hiding, by knowing people, speaking. For children, playing together. It’s a good chance to meet people today, and I hope we will be able to all make the best of the opportunity.”

“We came today for my daughter and her friend, but also because we are friends with a Syrian family who could not come.” says Nazife Topluogura, a 46 year-old mother and school teacher from Turkey. “Their son Hassan, who is 10, really wanted to be here, and so we said we would take him. That has been good in itself. Because we do not live in this part of town, but he does. So, it was like a tour, with him as the guide! We drove around where he asked us to, and he showed us where his school is, where he plays when he goes out. Even though he’s a Syrian child, he lives here and he has been teaching us things we did not know about our own city!”

“It’s been lovely to see the children playing with each other. It’s important they have places to play, as equals. That is where they can make friends.”

Also in attendance at the Festival was CARE Turkey’s Country Director Christina Northey.

“I would like to acknowledge the welcome and generosity the Government of the Republic of Turkey provides to refugees fleeing from the conflict in Syria and other parts of the world,” said Northey. “This is matched by the friendship Turkish communities give to refugees, which we see here in Kilis. I would also like to acknowledge the contributions refugee communities make as they establish their lives and integrate to the local economy and society. I believe the rest of the world can learn a lot from the positive examples of welcome and the provision of safe places we have seen in Turkey.”

Learn more about how you can help Syrian refugees and their host communities by supporting CARE.