Keeping my smile up: My visit to Azraq refugee camp

My reasons why? Firstly, I’d been having some trouble navigating life stuff. Things weren’t at their best. Secondly, I was worried about looking like a privileged actress who was going to the Middle East to grace everyone with her privileged presence, look sad hugging some kids, and go home to her privileged existence. Thirdly, other than what I saw and read in the news, I felt like I knew very little about the refugee crisis, and was deeply doubting that I was the right woman for the job.

After a sleepless, anxiety-filled night of trying to find a diplomatic way out of this, I got an early morning text from my mum saying, "On the train! We’re going to Jordan today! How fortunate we are." So. I went to Jordan with my mum. And I am so, so glad I did.

Though we were only in Jordan for 72 hours, CARE packed so much into our schedules that I feel like I could write a huge oak tree’s-worth of pages about every person I met, every story I heard, and every CARE program I learned about (and I hope to). But! The thing I’d like to write about today is our trip to the Azraq Refugee Camp on our last day in Jordan, because – and excuse the incredibly eye-roll inducing, yet entirely unavoidable cliché – it changed my life. 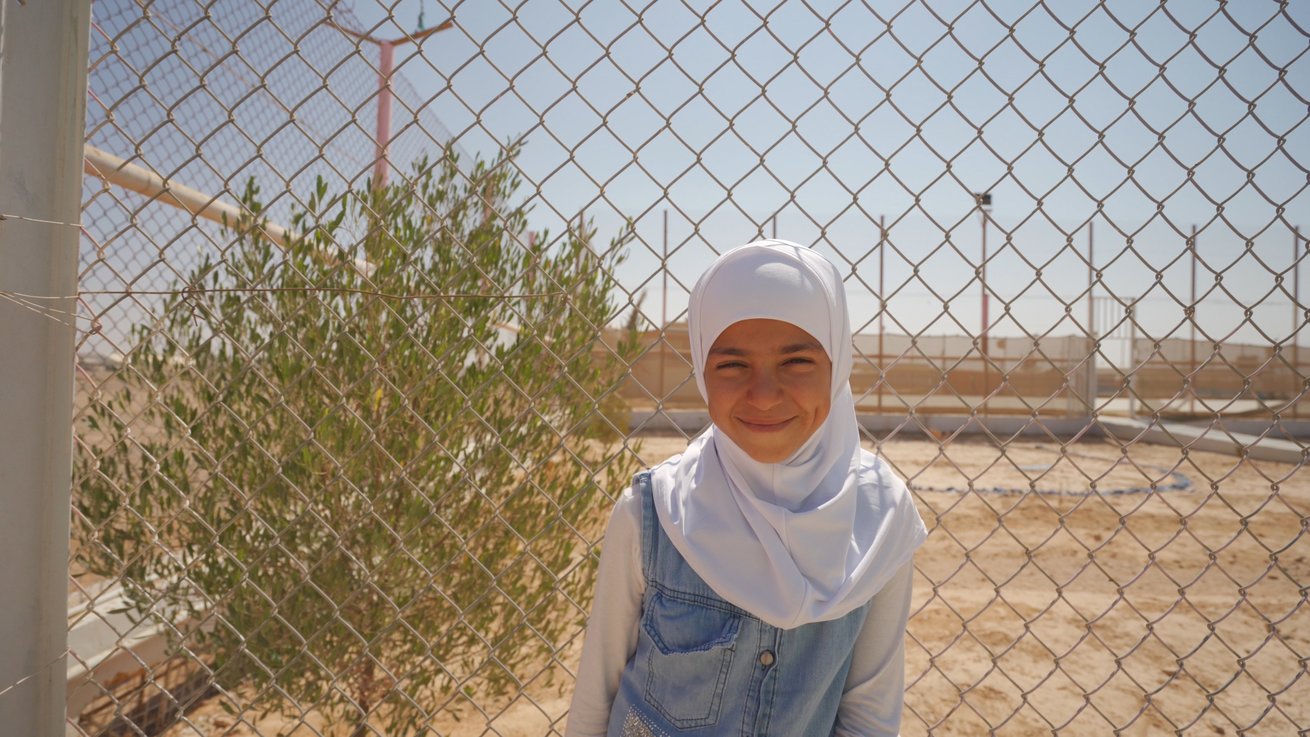 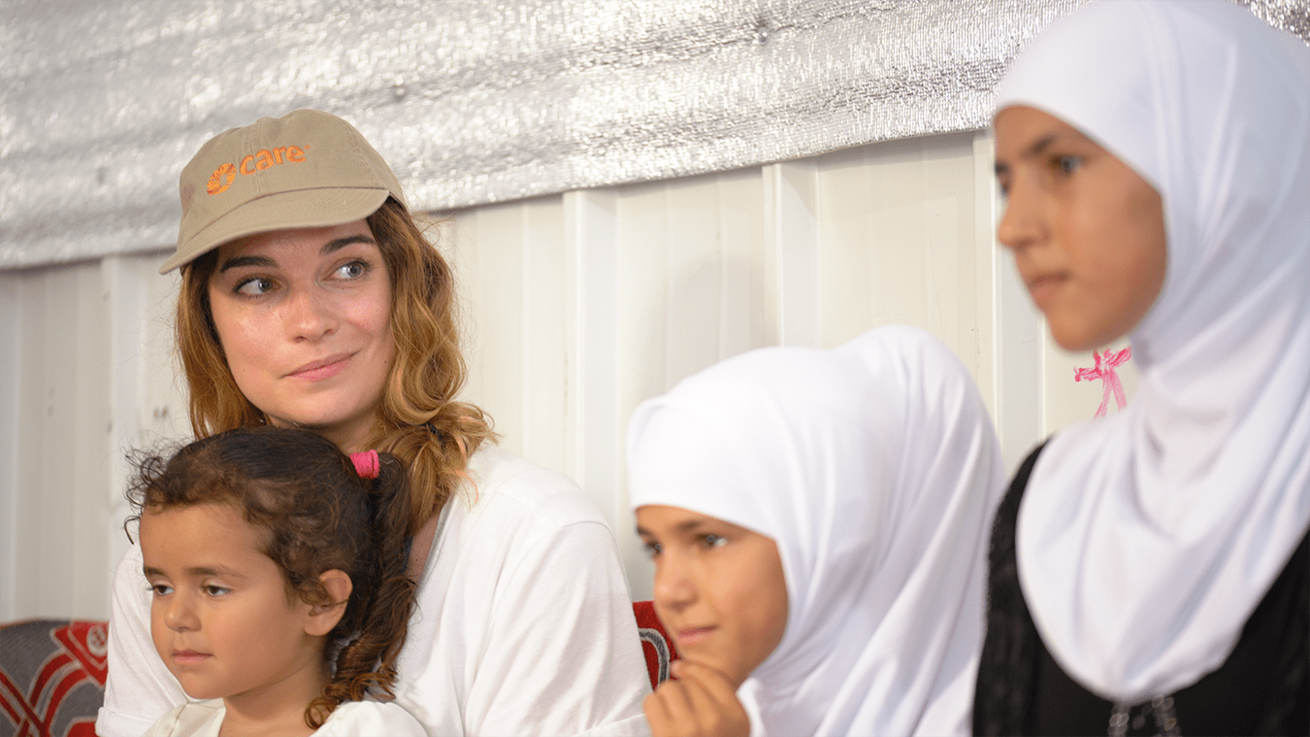 We left Amman early in the morning, and began our drive to Azraq. It took us about twenty-five minutes to get out of the chaotic city traffic and then for the next hour we drove through desert. Barren, scorched, unlivable desert. Just as I was about to be the are we there yet? kid, the first signs of Azraq began to appear. Barbed wire fences, then a security checkpoint, and then a dusty, beige, low-rise city of 36,000 Syrian refugees.

Jameel, a CARE worker who helped establish programming even before the camp opened in 2014, met us at the check-point to take over driving and give us the lay of the land. We were 90 km from Syria, 75 km from Saudi Arabia, and 255 km from Iraq. Sixty percent of the camp was made up of children. A refugee living in the camp may have to get by on as little as a few dollars per day.

We attracted a whole lot of attention driving into Azraq, and it wasn’t the negative “who the heck do these foreigners think they are?” attention I was expecting. Small children who were collecting water at the newly installed spigots dropped their buckets and ran towards the van, waving with all their might. A mother caught up with her brood of kids and made them follow her lead in smiling and waving. A father walking along the dirt road held his newborn daughter above his head proudly showing her off.

"Everyone’s so welcoming!" I said to everybody in the van. There was a brief pause before Jameel responded. "Everyone wants to be seen," he said.

It was then that I realized that my mother and I, along with the videographers who accompanied us to document our journey with CARE, weren't just visitors. We were an opportunity to be seen by the world outside Azraq.

Our first stop at the CARE centre was to take a look at the three massive schedule boards set up, laying out all of the programs that were available to the kids: computer skills, meditation, Zumba, storytelling, drama therapy, intelligent hour, family awareness, developing of self-awareness, music, taekwondo, and expressing imagination through creativity. We were told that every class was packed to the brim with kids.

AND OH, THE KIDS! Our next stop was the daycare building, again packed to the brim with kids, ranging in age from 2-10. There were tiny tables and chairs and toys scattered everywhere. There was a little bald kid toddling through the crowd gnawing on a cucumber, walking into things, falling down, getting back up again, and continuing to gnaw on his ever-dirtier cucumber. There were shrieks of delight and there were screams of discontent. It was deafening.

And then…there was a very thin wall and an open door to the other side of the daycare where the younger children were. We walked into the nursery where there were four babies sound asleep in cribs.

Despite the insane commotion outside, each child was eerily still – so still that I waited by each crib to make sure that they were breathing. The last crib held a baby with his arms straight down by his sides, his head tilted at an awkward angle, and his mouth open just a bit. My mind went immediately to the gut-punching picture in the newspaper four years ago of Alan Kurdi, the three-year-old boy washed up on the beach after his family had attempted to escape Syria. These crying, laughing, sleeping kids were all Alan, but with a different fate.

After the daycare, we went next door to the recreation facility where the "intelligent hour" activity was in full swing. A Syrian volunteer (who had been a professor back in Syria) was leading 50 kids in a math game. The game, I gathered, was basically, “I call out something from the multiplication table, you guys scream numbers at the top of your lungs until someone finally screams the right answer, and then the whole room applauds.” I’ve never seen such a delighted and eager math class. Of course, there was a prize on the line – a ping-pong ball.

About two minutes into intelligent hour, I felt a hand slip into mine, and I looked down to see one of the biggest, goofiest smiles I’ve ever had the pleasure of seeing. It belonged to a girl who was probably nine or ten, and she was my shadow for the next 30 minutes.

I plan on doing everything I can to make sure the smiles of Asma, Rayan, Zeinab, and their siblings are kept up because these kids (and so, so many others) deserve to have a future that is bright, positive, and full of hope – just like them.

There are many, many affectionate kids in Azraq, wanting hugs and high-fives, but this little one seemed to want more. I don’t suppose to know her story but I couldn’t help but wonder about her life. After many hugs, many snuggles, and many hand squeezes, it was time for me to go. I crouched down to give her a hug goodbye. She threw her arms around my neck and squeezed me so hard her entire body shook. Then she said, "I love you."

Our final stop before leaving was a visit to the home of Asma, Rayan, and Zeinab – three sisters who we had met earlier that day. The reason we met them in particular? They each have a very impressive story. Asma (17) was the first girl in the camp to ride a bike. She has achieved her black belt in taekwondo, she wrote and directed a film about her journey to bike riding, and she’s an avid musician. Rayan (14) is doing everything in her power to soak up every drop of English she can. She is also enrolled in the film program, wants to be a pediatrician, and is currently sitting on her student council advocating against child marriage and for further education. Zeinab (11) is one stripe away from her black belt in taekwondo. She designs clothes, plays music, rides a bike, and sits on her student council advocating against bullying. If even half of one of those resumes belonged to me, a 32-year-old North American woman, I would be pretty proud of myself.

We were welcomed into the girls’ home by their mother Badra and their six brothers and sisters, the youngest of whom is 3 months old. Their home in the refugee camp was a small, plain shelter with a metal roof and walls. We sat down to chat together in the main room, which doubles as a bedroom for the nine kids at night, and were offered snacks and refreshments (soft drinks for the guests but NOT for the kids).

The mood in the room was light and fun – the kids whipping out dolls with homemade and designed clothes, then throwing themselves on my lap to show off their counting skills in English: "One…two…three…four...four…six…ape… eleven!" (she’s three, give her a break). Rayan read me one of her favourite quotes that she found on the internet and had saved so she could read it over and over: "When you know yourself, you are empowered. When you accept yourself, you’re invincible."

The excitement and curiosity of these bright-faced kids was infectious. The translator had to keep telling them to slow down. She was having trouble keeping up with all of the adventures they wanted to tell us about: what they want to be when they grow up, their favourite foods, who was the best at bike riding.

I asked Rayan what she missed most about home. "Flowers," she said without any hesitation. She then proceeded to show me a file on her phone dedicated exclusively to pictures of wildflowers, with every picture seeming to surprise her again through the beauty of each flower.

When it was time to leave, the whole family walked us out to the van. I was smothered in hugs and kisses and promises of newfound friendships and being reunited before too long. Just before I got in the van, Rayan took both of my hands and held them close to her chest. She looked at me with her sparkly eyes and equally bright smile and said, "Keep your smile up, Annie."

So that’s what I plan on doing. I plan on keeping my smile up, because though so much of what I saw made me sad, and made me angry, it also reminded how much good can come out of strength, and courage, and perseverance. I plan on doing everything I can to find a way of being that person who comes home from a significant trip with important things to say. I plan on doing everything I can to make sure the smiles of Asma, Rayan, Zeinab, and their siblings are kept up because these kids (and so, so many others) deserve to have a future that is bright, positive, and full of hope – just like them.

Join me in building a community of support for girls like Asma, Rayan, and Zeinab. Together, we can help them to unlock a better, brighter future for themselves and their families.