Suffering in Silence: The 10 most under-reported humanitarian crises of 2019

In 2019, over 51 million people suffered in 10 crises away from the public eye. Although for the average person on earth, life is better today than ever before, around 160 million people will require billions of dollars in humanitarian assistance to survive.

Each year, CARE releases its Suffering in Silence report on the 10 most under-reported emergencies taking place around the world. Here are some of these crises:

Madagascar ranks among the poorest countries in the world, with three-quarters of its population living on less than US$1.90 per day. It is one of the countries most affected by climate change because it is so vulnerable to natural disasters, such as recurring cyclones, chronic droughts and pests. The country is also extremely dependent on farming and natural resources, which are affected tremendously by these extreme weather events.

At the end of 2019, more than 2.6 million people in Madagascar were affected by the impacts of drought, and more than 916,000 people were in immediate need of food assistance.

Since gaining independence in 1960, the Central African Republic (CAR) has suffered through ongoing, violent conflict.

About 2.6 million people, more than half of the population, need humanitarian assistance and one in four people have been forced to leave their homes in search of safety.

Years of conflict have also taken their toll on people's health, the water supply and sanitation, and make it nearly impossible for people to farm their lands and make a living.

Consequently, 1.8 million people–41% of the population–are in need of food. People are often unable to access to fields because of movement restrictions. This means that people cannot plant and maintain their crops, or hunt and gather. Security concerns along trade routes have also disrupted market activities and have led to food shortages and rising prices.

In Zambia, the effects of climate change are undeniable. Around 2.3 million people in the country are in urgent need of food because of recurring and long-lasting droughts. Temperatures in the region are also rising at about twice the global rate, according to the Intergovernmental Panel on Climate Change.

Zambia, along with its neighbouring countries, is increasingly being impacted by more extreme weather shocks. Malnutrition is very high in the country, where about 40% of children are stunted⁠—meaning their growth and development was lower than normal due to poor nutrition. 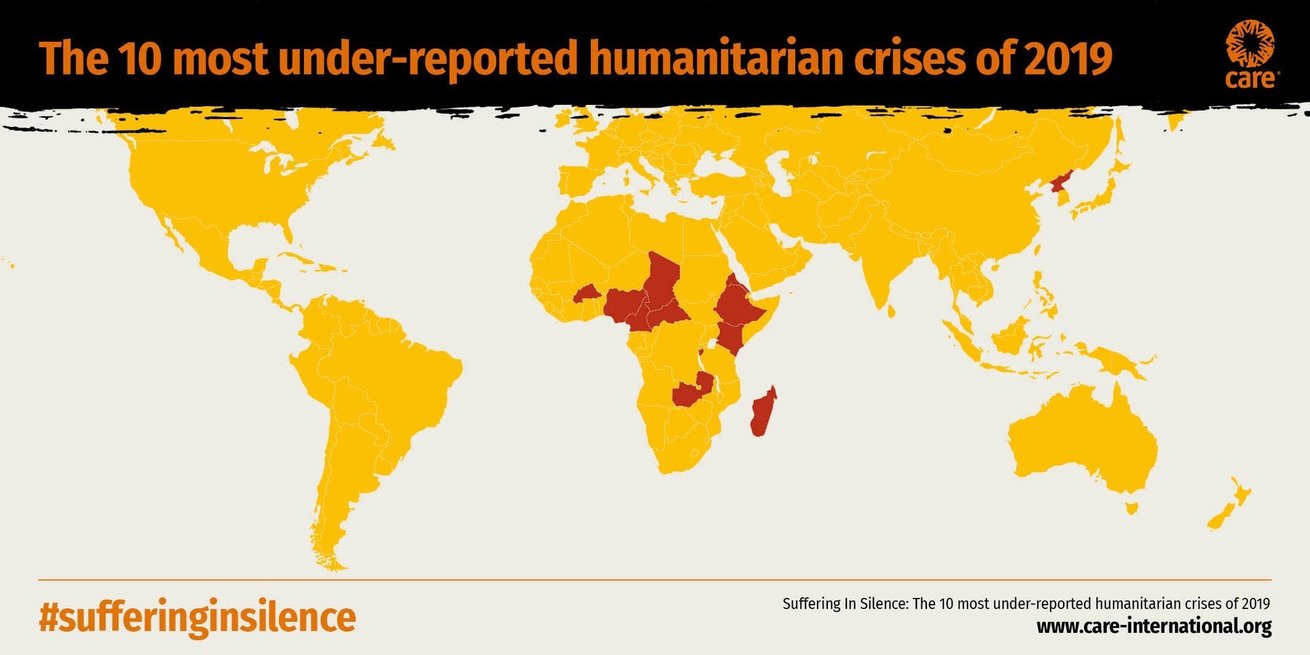 These are are just three of the top 10 under-reported crises of 2019.

Suffering in Silence serves as a call for everyone to speak up for people in crises who are otherwise forgotten. The aim of this report is to analyse those crises that, though affecting millions, have received little of the world’s attention while acknowledging that each emergency is unique in its causes, needs and complexity. The report also asks the question of how to ensure better global attention to humanitarian situations, outlining different ways to shine a light on forgotten crises.

See the full report and find out what you can do to give voice to the millions of people around the world who need our help: