When her husband got sick with COVID, Safora started a small business selling Bolani (fried flatbread stuffed with vegetables). She shares her story and her fantastic Bolani recipe for you to try at home!

My name is Safora. I am a mother of three sons and two daughters. They all go to school. We live in the Kabul suburbs in Afghanistan and have a normal life, just like other families in our small community. My husband worked hard in the market as a daily wage laborer to make a living before the COVID-19 pandemic. I took care of the house and the kids.

When more and more people were infected with the virus, the government announced a lockdown. My husband couldn’t work anymore because the markets were closed, and soon after, he had some coronavirus symptoms like fever and cough. I asked him to get tested, and it came back positive. His health was getting worse day by day. I had to take him to the hospital. I bought my husband’s medicine as he was isolated in the hospital. I was worried because I couldn’t afford to buy the basics my family needed, but I had to stay strong for him and our children.

We had a small amount saved for emergencies, but we spent all of our savings in a week or two after he went to the hospital. I am a member of the local Village Savings and Loans Association (VSLA)—a group of women who come together to save, lend and borrow money. I took out a loan to pay the hospital bills, feed my kids and buy hygiene products to keep us safe from the virus. My husband started to get better, and slowly markets re-opened, but he still couldn’t work.

We used most of the loan for my husband’s medical bills. I decided to use the rest of the money to start a small business and sell Bolani (fried flatbread stuffed with vegetables) so I could afford to feed my children.  I bought ingredients for the Bolani, like flour, potatoes, vegetables, and cooking oil. I also bought a gas cylinder and cooking utensils. I did not make much money, so I tried to work more efficiently. My mother-in-law helped me sell the Bolani in the market and when they went cold, we sold them at a reduced price. I couldn’t sell all the Bolanis in a day, but I did not lose hope. I kept working for a week, and then I started selling more and could cover some of my family’s living expenses.

Our relatives have suffered a lot during the pandemic. The situation was terrible, and many people died. I suffered from depression but had to keep strong for my husband and children. The memory will stay with me for a long time. My husband has still not fully recovered and cannot work like he used to before the pandemic. Sometimes he does a bit of work. This pandemic was a lesson for us. We now know that we must value our health, our families and always support each other.

Safora has been a member of CARE’s Village Savings and Loans Association (VSLA) for the last five years, where members contribute an average of 100 Afghanis (USD$1.30) monthly. CARE’s community-based savings groups enable women to increase savings and access loans. Safora previously took out a loan to pay her children’s school fees.

The VSLA is part of CARE’s Norwegian government-funded Gender Equality and Women’s Empowerment Program, which aims to support vulnerable women in Kabul to be economically, socially, and civically empowered. 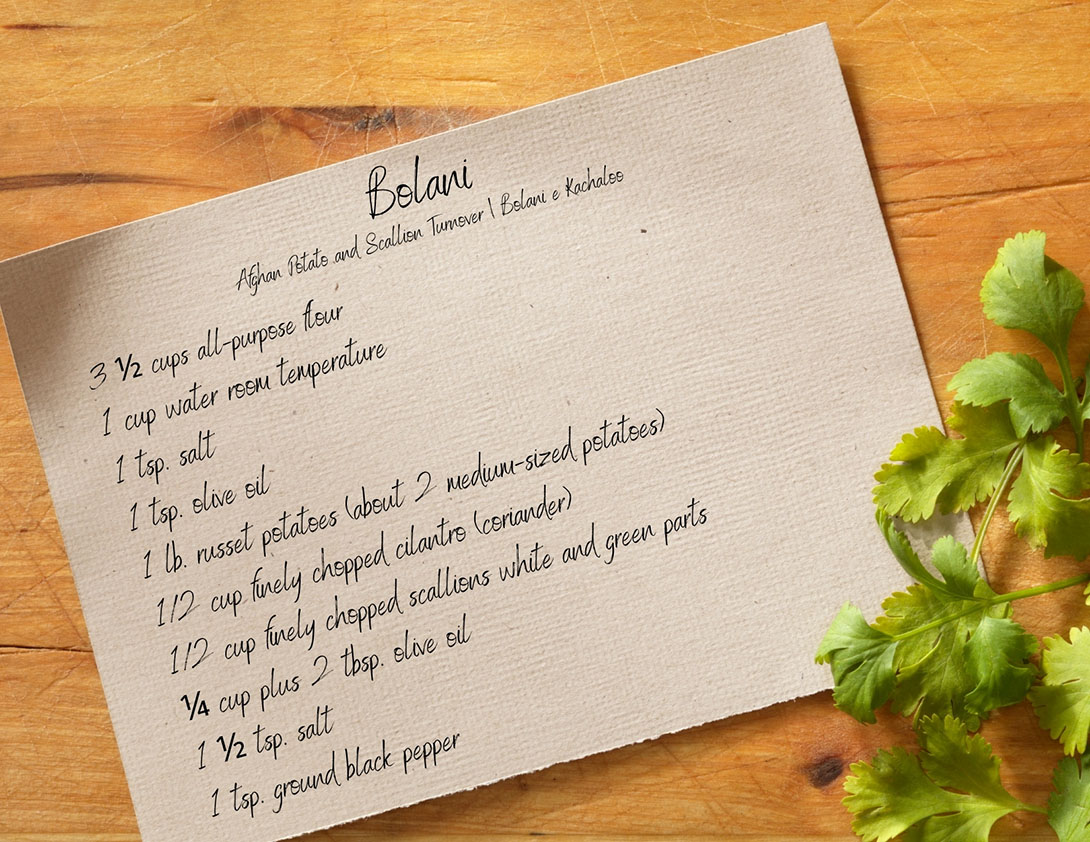 Mix the flour and salt together in a large bowl. Slowly add the water and the teaspoon of oil and mix the dough together, kneading it a little until it forms a ball. If the dough is too dry to come together, add more water, a tablespoon at a time. Once the dough is formed, knead it for 10 minutes on a lightly floured cutting board. If you are impatient like us, set the timer so you won’t reduce the kneading time. Put the dough back in the bowl, cover with a cloth and let it rest for one hour.

In the meantime, boil the potatoes until soft in the center when pierced with a small knife. Remove from the water and when cool enough to handle, slip the skins off the potatoes. Put the potatoes, cilantro, scallions, 2 tbsp. of the olive oil, salt and pepper in a bowl and mash together with your hands or a potato masher until thoroughly combined. Some lumps are ok. You can also make this the night before and keep it refrigerated until ready to use.

Take a small amount of dough the size of a small apple and roll into a smooth ball. Spread some flour on the wood board and roll out the dough using a rolling pin. Continue to flatten the dough until it takes a round shape, is as thin as a tortilla, and about 10-12 inches across. The thinner the dough the better. If you have trouble rolling the dough to the shape you want, use a lid from a pot to trace a perfect round shape.

Spread ¼ cup of potato mixture on one side of the dough, leaving a 1/4 inch border around the rim. Fold the other half over and press the dough together with your finger to form a seal.

Heat the remaining ¼ cup of oil in a medium-sized sauté pan over medium-high heat. Brown the Bolani, two at a time, until golden on both sides. The Bolani should sizzle when they hit the pan. Lay cooked Bolani on a paper towel. Add more oil to your pan if your oil starts to reduce. These are best served warm but are tasty at room temperature.

If you don’t want to make the dough, use flour tortillas instead. it always turns out well and saves time.

In a small dish, combine the flour and water to make a paste. Set a tortilla on your work surface and spread ¼ cup of the potato mixture on the tortilla, leaving a half-inch border around the rim. Using your finger, spread a small amount of the paste around the edge of half of the tortilla. Fold the tortilla over, encasing the potatoes into a half circle. Press the two sides of the tortillas together firmly to form a tight seal. Brown the Bolani following the instructions in the recipe above.