“I can help women raise their voices”: Halatu’s story

Halatu Benjamin fled violence in South Sudan with her five children and two nieces. She has been living in the Omugo refugee settlement in northern Uganda since March 2018. Despite her trauma, Halatu has found solidarity and a sense of purpose as part of her women’s group within the camp.

The group saves together and supports members to set up small businesses, but perhaps most importantly, the group has discovered their collective power to improve the lives of people in their community. As for Halatu, she has discovered her inner leader, creating safe spaces for women in the camp, organizing a boycott to force humanitarian agencies to address issues raised by the group, and taking on roles in the Refugee Welfare Council, where she can support other women to raise their voices.

Since 2016, there has been an influx of more than 880,000 South Sudanese refugees in Uganda, the majority of whom are women and children. Life has been hard for Halatu, who takes care of herself and seven children. “Being a refugee, the situation is not good, especially as a woman with the children alone, without a father.”

COVID-19 has made life even more difficult. Halatu’s food ration has been reduced, schools have closed so she has all seven kids at home, and movement restrictions have made it almost impossible for her group to save and do business.

Despite the difficulties, Halatu has always been willing to get stuck into to life in the camp. She is Chairperson of the Women’s Centre Management Committee in Omugo: “We go there every week and spend time talking and encouraging each other.” 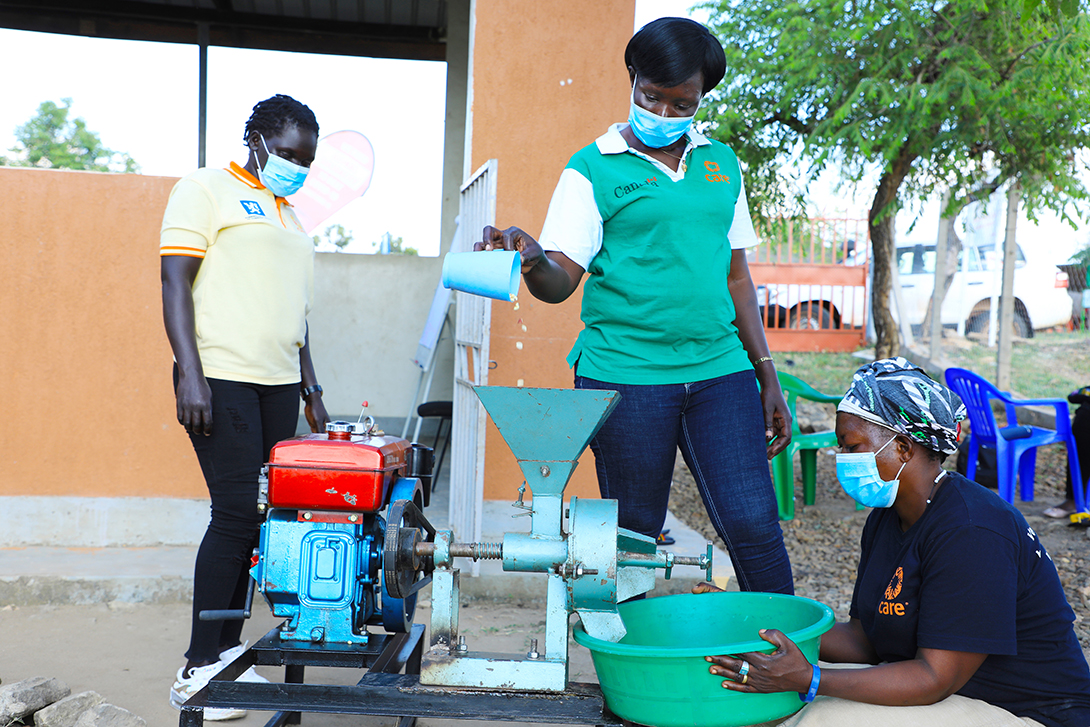 She understands the importance of sisterhood: “I looked for other women and told them that we form a group to support each other and build emotional support since most of us were without husbands.” They formed a savings group with 26 members and set up a group business buying groundnuts and making paste that they sell at affordable prices to fellow refugees.

In 2019, CARE invited the group to join the Women Lead in Emergencies (WLiE) program, an approach that works with crisis-affected women to increase their meaningful participation in community and humanitarian decision-making. As part of the program, Halatu and her group requested business management and leadership training. Thanks to the training, says Halatu, “I can now stand on my own. I was able to borrow some money and start a small business, handcrafts and sandals, as it helps me to support my children.”

The group has also discovered their collective power: “We opened our eyes that we can do things both as a group or as an individual.”

“When a woman is in leadership...It’s easier because they understand better the issues faced by other women and they can raise the issues directly.”

One of the issues that the group decided to tackle was the long distance to the food distribution point, which was more than 10km from the village where Halatu lives and served five different villages. The women had to wake up very early in the morning to travel to the distribution point.

“You would see pregnant women walking a long distance…Some mothers had to walk with children on their backs.”

On the long journey, women were at risk of gender-based violence (GBV). Once they arrived, sometimes they would wait the whole day and not get any food. The next day it would start all over again.

They spoke with the Chairperson of the Refugee Welfare Council. They wrote letters to UNHCR (the United Nations refugee agency) and to the police reporting that women had been raped making the long journey and they were not prepared to continue this way. Halatu met with the camp commandant and focal person from the Office of the Prime Minister. Enough was enough:

“As women, we are fighting for our rights, we have been talking about these things but there has been no change.”

Halatu’s women’s group is also going strong: “We are solving issues as empowered women with a group supported by 30 role model men.”

They advise GBV survivors where to find support: “Women in the community trust the group and usually call us to support in GBV prevention. We give counselling and encourage families to stay in peace.”

They are mentoring two other women’s groups in Omugo and, during the pandemic, they have encouraged their community to wear masks, wash their hands and socially distance. They are also planning a side business making soap that they can supply to the community.

In these uncertain times, the leadership of women like Halatu should give us hope.

Women Lead in Emergencies is the first practical toolkit for frontline humanitarians to support women to take the lead in responding to crises that affect them and their communities. This approach puts decision-making—and money—in the hands of women directly affected by crisis. CARE and partners accompany women’s groups, as they increase their awareness of their rights, build confidence and solidarity, and take collective action to improve their lives and their communities. Find out more.

CARE's humanitarian response in Omugo has been generously supported by the Government of Canada since 2017. This work includes assisting refugees and host community members with sexual, reproductive and maternal health support, preventing gender-based violence (GBV), and Women Lead in Emergencies activities.

PHOTO ESSAY: A look back at the Sustainable Food Production Project (P...