Rebecca and her son at a check-up at a CARE supported health facility in the Pariang-Ruweng Administration Area of South Sudan. Mike Benjamin/CARE

A simple stitch that saves lives in South Sudan

South Sudan has one of the weakest health systems globally, especially in terms of access to sexual and reproductive health services. Maternal and neonatal health services remain a challenge for many women, with around 70% of the population living at least five kilometers from health facilities. The country has the highest maternal mortality rates of 789 per 100,000 live births, and neonatal and under-five mortality rates of 39.3 and 99.2, per 1000 live births respectively.

When 37-year-old Rebecca Nyayuol arrived at Pariang hospital in February 2021 she was filled with anxiety. She was three months pregnant, and although she looked healthy, Rebecca had already gone through the traumatic experience of miscarriage not once, but five times.

“Before coming to Pariang Hospital, I had lost five pregnancies at five months. During my fifth pregnancy, I used to feel pain in the back before losing the baby. I felt bad. Even with my current baby whenever I felt the pain, I thought I would lose the baby,” says Rebecca.

But unlike her previous pregnancies, this time Rebecca was able to receive the vital ante-natal support she needed at a CARE-supported health facility. During her visit, a scan was done showing Rebecca had a serious cervical weakness and needed a simple but critical surgical procedure known as cervical cerclage or a cervical stitch to fix it. This was successfully performed by head surgeon Dr. Mike Benjamin at Pariang hospital, and five months later Rebecca gave birth to a healthy baby boy. The simple stitch not only saved the life of her unborn child but also ended years of traumatic miscarriages. 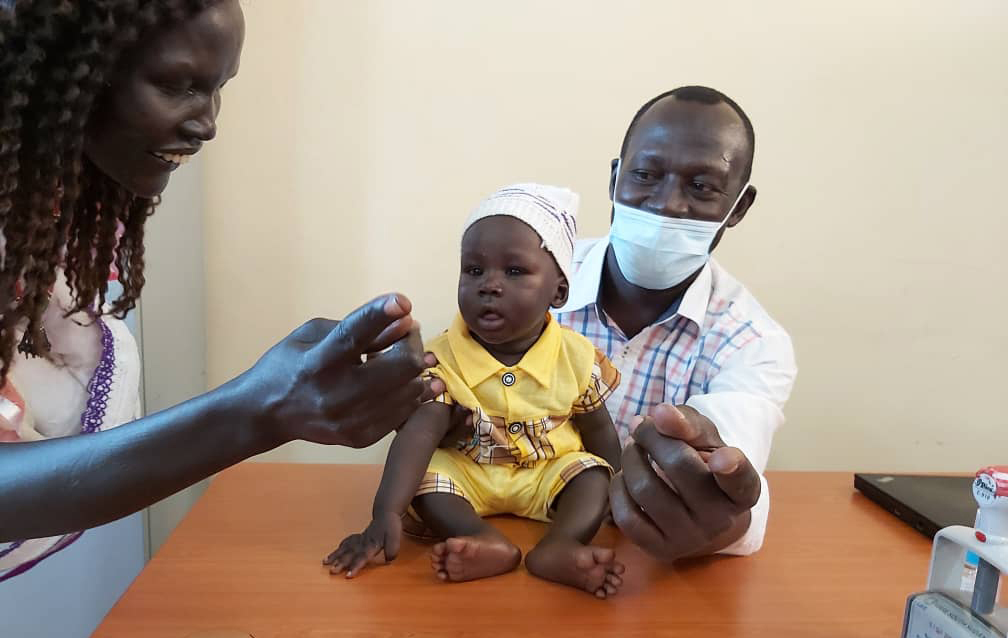 Dr. Mike, Rebecca, and her son during a routine check-up at Boma Hospital in South Sudan. Mike Benjamin/CARE

“After delivering my baby I was the happiest, everybody at home was filled with joy including my husband. My baby is well and healthy, thanks to Dr. Mike, the hospital team, and CARE."

Despite the huge challenges, CARE with support from partners, is delivering life-saving health care services to some of South Sudan's most remote communities. From 2021 to June 2022, CARE South Sudan’s Health and Nutrition programming has reached over 1.2 million people across the country. In Ruweng Administrative Area, CARE supports seven health facilities across Pariang and Yida Counties on the Sudan-South Sudan border to ensure refugees and the host communities at the nearby camps and settlements have access to health services. The hospital serves as a referral center providing specialized medical support including surgical and obstetrical operations, as well as a full package of reproductive health services such as antenatal care, antiretrovirals, and prevention of mother to child transmission of HIV, deliveries, and family planning services.

Your support can provide vital health care for women like Rebecca.