Hurricane Irma made landfall in Cuba September 8, 2017 as a Category 5 hurricane with strong winds and heavy seas leaving massive destruction in its wake. The entire country has been affected; winds exceeding 250km/h tore roofs off buildings, downed electrical lines and brought floodwaters into low-lying coastal communities. Officials reported significant flooding and waves up to 11 meters high. Homes, fields, schools, buildings and infrastructure have been affected. Irma will have a significant impact on Cuba’s agricultural and tourism sectors.

More than two million people were evacuated ahead of the storm, and hundreds of thousands remain stranded. Together, with local partners, CARE is responding with the most-urgently needed supplies, including water and sanitation supplies and shelter kits. 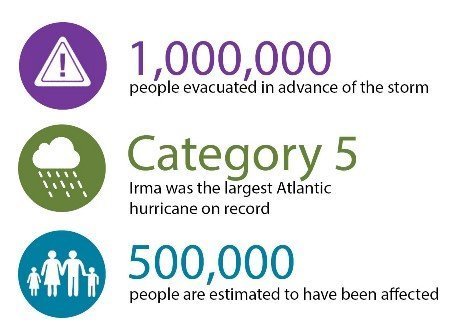 Your support can ensure urgently-needed relief is there for families devastated by this disaster and others around the world.

DONATE TO THE EMERGENCY REPONSE FUND

CARE and local partners in the affected regions are preparing to respond and will look to assist with water, sanitation, hygiene and household supplies and other relief items as needed. Over the coming days, CARE partners will be looking to travel to the impacted regions to assess damages.

CARE has been active in Cuba for more than two decades with programming focused on food, water and sanitation, disaster risk reduction, humanitarian assistance, and gender equality.

A year of war in Ukraine: Yulia’s story

Because of the war in Ukraine, Yulia and her children now live in a dark, and cramped semi-basement shelter in Lviv with a minimum of furniture and basic necessities, but, Julia says, “Now I finally feel safe.”

Friendship in the face of war

‘Everything is beneath rubble’ Testimonials from Cuba following Hurricane Irma