Mona is an IDP in Yemen, where she is spearheading a hygiene project in a camp for internally displaced people.

In 2017, Yemen experienced the worst cholera outbreak in modern history, with millions of cases in the country. The outbreak, which at one point was said to be killing one person nearly every hour, led to 3,757 deaths. Nearly 60% of cases were among children.

“No matter how hard I try, I’ll never be able to forget the suffering of the young children I observed who have contracted cholera,” Mona says.

The outbreak motivated Mona, 22, to start volunteering with CARE to help stop the spread of disease in the camp for displaced Yemenis where she and her family relocated after fleeing violence in Al Hudaydah governorate in 2016. Days after arriving, Mona’s father became sick and died.

In displacement camps, the lack of sewage systems and latrines often leave people with no options but to relieve themselves in the open. In addition, many people in the camp do not have access to clean cans when filling water from pumps, exposing them to potential infections or illness, such as cholera.

In response, Mona is working to promote hygiene practices in the camp, which is especially important now in helping curb the spread of COVID-19.

“Being a displaced person has always encouraged me to do something to help other displaced people,” Mona says. “I have always had a strong desire and determination to help both my family and my community.”

Due to six years of conflict, two thirds of people in Yemen are in need of humanitarian assistance, making it the worst humanitarian crisis in the world. An estimated 4 million people have been internally displaced like Mona and her family. Amid a pandemic, Yemenis are struggling to access proper water, sanitation, and hygiene, putting them at increased risk of COVID-19. 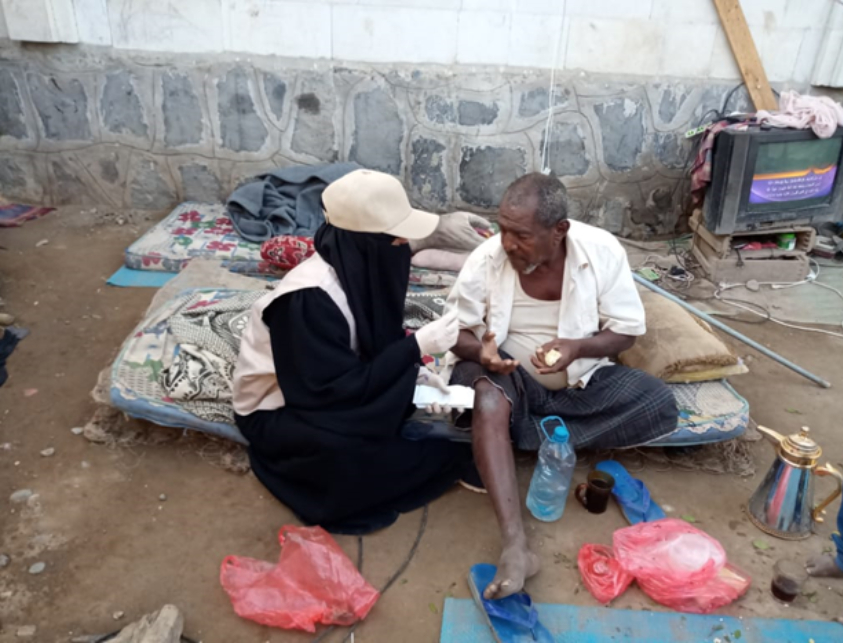 Mona started an initiative to clean and sterilize water tanks at distribution points and is also part of a volunteer team with CARE Yemen distributing hygiene kits. Photo: Bassam Saleh/CARE

“I [am] constantly worried that my people would get infected with cholera, malaria, and the latest COVID-19,” Mona says.

With half of the country’s health clinics closed or partially functioning, Yemen’s health system is not adequately prepared to deal with COVID-19 outbreaks. As of March 16, there are over 2,900 officially reported cases and over 700 deaths, although the country’s testing capacity is limited and the U.N., which has expressed concern about reporting, has said the actual number of cases is likely much higher. Mona started an initiative to clean and sterilize water tanks at distribution points and is also part of a volunteer team with CARE Yemen that goes door-to-door in the camp to distribute hygiene kits consisting of soap, detergent and other essential items. She also promotes practices like handwashing, food hygiene, and proper use of latrines.

“During my visits, I always focus on educating the children because they are the most vulnerable, in addition to their amazing ability to adapt and change their families’ behaviors,” she says.

Over the last year, CARE and many other humanitarian organizations in Yemen incorporated pandemic response into existing work. Thousands of community volunteers across the country who played a role during the cholera outbreaks are now educating their communities about the virus and prevention.

“I feel tremendous joy when giving hygiene kits to displaced families,” Mona says. “I have noticed that communicable diseases began to decrease in the camp, especially among children, as a result of the increased awareness.”

You can help empower women like Mona around the world to be leaders in their homes and communities.

PHOTO ESSAY: A look back at the Sustainable Food Production Project (P...